CODEX
On Heavy Slide Attack this Corpus scythe launches a spinning energy disk that ricochets throughout the battlefield. Its lifetime is derived from the size of the Combo Counter. Note: The Granum Attaché system pauses the combo timer when holstered.

Tenet Grigori is a unique Tenet Scythe whose Heavy Slide Attacks launch a short-ranged energy disk. The second attack in a Heavy Attack Combo will also launch an energy disk.

Can be bought from Ergo Glast of

The Perrin Sequence in any Relay for 40

Corrupted Holokeys (regardless of standing with The Perrin Sequence syndicate). Each offering has a random progenitor bonus damage type and percentage increase, which is cycled every 4 days. 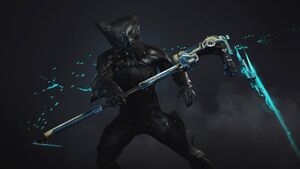