WARFRAME Wiki
Register
Don't have an account?
Sign In
Advertisement
in: Untradeable Weapons, Sword and Shield, Melee Weapons,
and 10 more

The Tenet Agendus is the Tenet variant of the Agendus hammer and shield combo that fires an energy disk on heavy attack.

Can be bought from Ergo Glast of

The Perrin Sequence in any Relay for 40

Corrupted Holokeys (regardless of standing with The Perrin Sequence syndicate). Each offering has a random progenitor bonus damage type and percentage increase, which is cycled every 4 days at 0:00 UTC. Only one copy of the weapon can be bought per rotation. 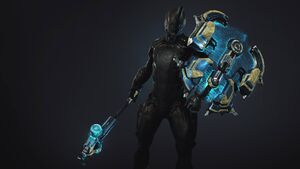