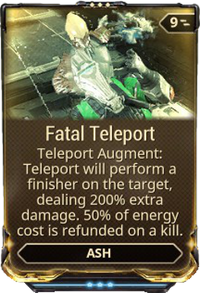 Fatal Teleport is a Warframe Augment Mod for

Teleport to immediately perform a melee finisher upon teleporting to the target, with an additional damage multiplier. Additionally, if the finisher kills its target, 50% of Teleport's energy cost is refunded.

Retrieved from "https://warframe.fandom.com/wiki/Teleport?oldid=2056012"
Community content is available under CC-BY-SA unless otherwise noted.