Cephalon Simaris
Synthesize a genetic data of the target and uploads it to Sanctuary.
—In-Game Description

The Synthesis Scanner is a special device that can be acquired from Cephalon Simaris, and is necessary to conduct Synthesis for his Sanctuary. The device allows the user to see enemies, destructible objects, and important objects through walls and obstructions. It is also a range-finding device that can measure the distance from the scanner to the targeted terrain or object.

This can be purchased in a set of 25 charges from the Offerings section of Cephalon Simaris for 5,000 Credits 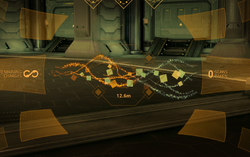 Cephalon Simaris will announce the presence of a Synthesis Target when entering a mission that contains the desired unit. When zooming in (RMB ) with the Scanner, a blue and orange spiraling shadow trail will appear, with the orange end pointing to the direction of the target. The target will appear with a blue outline and be marked on the HUD and minimap once the player locates it with the scanner zoomed-in. To use the scanner on the identified target, equip the Scanner from the Gear menu, then scan (LMB ) the four nodes visible on the target's body. Once all nodes or body locations have been scanned, the target will dissipate, signifying a successful synthesis.

Synthesis Scanners can also be used much like the Codex Scanner, providing Standing from Cephalon Simaris for each successful scan of any enemy or unit while also adding an entry for the Codex. Stealth scans will provide a significant bonus to Standing earned.

Widgets are upgrades that are permanently applied to Synthesis Scanners upon being purchased, enhancing their utility. There are four Widgets available for Synthesis Scanners and are all bought from Cephalon Simaris. The Data-Parse Widget costs 25,000 Standing

50,000. All four Widgets can be applied simultaneously.