Synthesis is a community-driven project organized by Cephalon Simaris, with the goal to populate the Sanctuary database with uncovered knowledge behind the WARFRAME universe.

The goal of Synthesis is to analyze a selected Synthesis Target multiple times and fulfill the targeted amount stated in the Sanctuary, using proprietary tools such as the Synthesis Scanner and Kinetic Siphon Traps.

The primary mission of Cephalon Simaris, community Synthesis tasks all players with scanning a single designated Synthesis Target multiple times. Each successful Synthesis by a player contributes to the overall community progress, which accumulates as more players successfully complete Synthesis on the target.

The community progress of each Synthesis is tracked via a progress bar and a leaderboard. A personal progress bar out of 10 synthesis target scans is also shown to the player, which they must complete in order to attain access to the respective synthesis results. Once the community progress is completed, the Tenno will be rewarded with elaborated lore related to Warframe, which can be accessed in the Sanctuary. After completing one community Synthesis target, Cephalon Simaris will choose a new Synthesis Target, which may take several days before a new one is selected.

Previous Synthesis Targets that have not yet been fully scanned by the player can be selected as a personal target on the left console in the Sanctuary to complete the scan and unlock the corresponding lore entry for the player.

The Synthesis project can be started by visiting the Sanctuary in any of the Tenno Relays, and then speaking to Cephalon Simaris about Synthesis, who will explain the process. The player will then be provided with a free starting set of Synthesis Scanners and Kinetic Siphon Traps once the conversation finishes.

Players who have completed The New Strange and the Stolen Dreams quests can ask Cephalon Simaris for Daily Synthesis Tasks, which assigns the player to synthesize a personal Synthesis target a set number of times. This Synthesis Target is a specially marked unit similar to the community Synthesis Target, but is otherwise separate from the latter.

To activate the task, players must ask Cephalon Simaris in the Sanctuary with the prompt "Do you have any targets?", which will then display the designated target, and the rewards upon completion. Simaris will only provide the rewards once the designated Synthesis target has been scanned the required number of times, and the player returns to speak to Simaris with the prompt "I have completed the synthesis". Rewards for completing a Daily Synthesis Task include a random amount of Endo, and a large amount of Standing depending on the number of targets scanned:

Scanning objects and enemies will grant the player

Standing, where the amount of Standing awarded is scaled with the enemy level and will multiply further if a stealth scan is successfully performed. Successful synthesis of the Synthesis Target will also grant extra amounts of Standing and contribute to the Synthesis community progress in the Sanctuary.

Kinetic Siphon Traps can assist in Synthesis Scanning by temporarily suspending Synthesis Targets in stasis, ceasing their movements for a short period of time. They can be deployed by throwing near a Target and will automatically take effect. Each Kinetic Siphon Trap lasts four seconds.

When entering a mission that contains a Synthesis Target, Simaris will announce its presence. They must then use their Syththesis Scanner and zoom in (RMB ), revealing a blue and orange spiraling shadow trail, with the orange end pointing to the direction of the target. Once the target is found with the scanner zoomed in, Simaris will notify the player that they have found the target, which will then be marked with a unique waypoint.

Despite their high durability, it is still possible to kill a Synthesis Target. As the objective is to scan and not kill, Simaris will warn players if they manage to sufficiently injure one, and will angrily reprimand them if they succeed in killing it.

Synthesis Targets tend to move a lot, which can make scanning their spots a difficult proposition. Using melee slam attacks to knock them down can be effective, as most Warframe powers have reduced or negated effects on them. Keep in mind that if the target uses their Riftwalk ability (listed below) or otherwise enters the Rift Plane, they cannot be scanned from the opposite plane; however,

Limbo can freeze them with his

Stasis, and then scan them while they are in the Rift. Note that if one uses Banish to displace the target, and then initiates Stasis, the target will exit the Rift Plane early, but Stasis will continue to affect them; thus, they will be frozen in the material plane.

Synthesis Targets are capable of deploying different special abilities, which unlock upon their first node being scanned. They can use these abilities to impede player attempts at scanning them, whether by dealing damage or enhancing their chances at evading the player. A Synthesis Target can only have one particular ability at a time, and the ability they receive will be random. Certain Synthesis Targets, namely those of the Infested faction, have been known to ignore their special abilities. Some known abilities are listed below:

This steam guide has spawn locations: 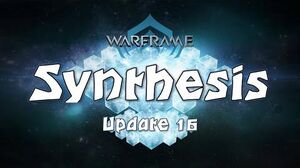 Warframe - Synthesis
Add a photo to this gallery