Syndicate Medallions are objects that can be traded for Standing in a respective Syndicate's enclave in a Relay. Medallions can be found on the daily Syndicate Alert missions as physical objects scattered throughout the map that must be interacted with to pick up. There can be up to 8 to collect per mission, and each medallion rewards either 500 Standing

5,000 Standing for that respective Syndicate.

Redeeming these medallions will gain Standing with that syndicate and its allies, but it will also reduce Standing with opposing groups as when gained through Affinity. They can be redeemed regardless if the player has reached their daily Standing cap with a particular Syndicate.

*Voidplume Crests are treated as Rare Medallions by the game, but are only worth 2,000 standing instead of 5,000. See the Voidplume article for more details.

Each type of medallion has visual identifiers to distinguish them; 500 Standing

500 Standing Medallions have an occasional gleam animation (similar to the shine on containers/etc.), while 1,000 Standing

A medallion prized by all the syndicates. Can be traded in on relay syndicate hubs for additional standing.

https://www.warframe.com/droptables
A medallion prized by all the syndicates. Can be traded in on relay syndicate hubs for additional standing.
—In-game description

The Universal Syndicate Medallion is a unique Medallion that can be redeemed at any Syndicate for 1,000 Standing

1,000 of the chosen Syndicate's standing, regardless of the player's affiliation. Aside from the 6 principal Syndicates, Universal Medallions can also be redeemed with the Ostrons, The Quills, Solaris United, Vox Solaris, Ventkids, Cephalon Simaris, the Entrati, the Necraloid and The Holdfasts.

Universal Syndicate Medallions can be granted as rewards from Disruption missions.

Firstly, it's important to note that regular medallions can only be found during Syndicate Daily Missions and as a Daily Tribute reward. They can be found in most mission types, but depending on tileset, they may not be available in Interception and Defense missions. Universal medallions are only found in higher-level Disruption missions as a Tier C reward.

Regular medallions can most often be found off the regular mission path, hidden away inside rooms and so on. Since they are not highlighted by the Codex Scanner, your best bet is to use

Loot Detector to make the medallions show up on the minimap (albeit using the same icon as Storage Containers) and search thoroughly. It's important to remember that many rooms have hidden areas (often behind vents/gratings/fans) that do not appear on the regular minimap, and medallions can often be found hidden in these secret spaces. Remember to pay attention to your surroundings and explore!

A further way to help find them, unlike normal pickups Syndicate Medallions will not get pulled by a loot collection mod like

Fetch, which can normally pull collectables through walls and floors. Shooting a weapon with a wide AoE blast into a wall with loot objects behind it can typically break the containers and you can often get close enough to them for Fetch to work; if one of the loot icons on the radar does not get pulled when ones right next to it did, that is highly likely to be a Medallion.

When a regular medallion is collected, it will tell you how many medallions you've found and how many are left in the mission area. As noted above, there will be as many as 8 regular medallions total in a mission. Making sure to collect all of the medallions in all of your daily missions can very easily double or even triple your Standing gains by the daily limit (depending on luck with the types).

As for the regular medallions themselves;

This means that collecting all medallions in a mission grants 10,125 Standing 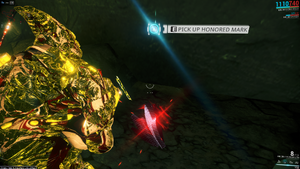 A closeup of the Honoured Mark used to redeem standings with the Red Veil with its light effect. 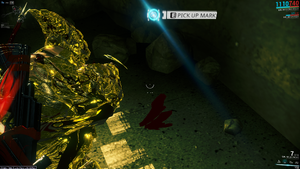 A closeup of the Mark used to redeem standings with the Red Veil. The shining moment of this Mark is not visible in this screenshot, as it only shines for about once per two seconds. 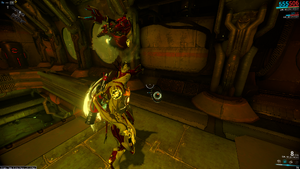 An Insignia used to redeem standings with Steel Meridian. This screenshot captured the moment when it shines which lasts for about one second or less. 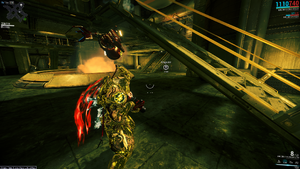 This screenshot shows how visible a Mark is from far away, it is just to the left of the waypoint. You may need Fullscreen to see the Mark. 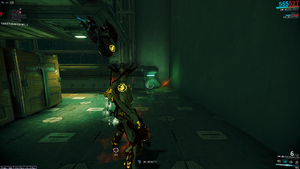 The Defender Insignia used to redeem 500 standings with Steel Meridian. Its light effects are visible and consistent from this angle and distant. It may be less visible if it is too close to the player from a specific angle. 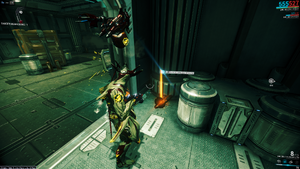 This screenshot captured part of the Light Pillar effect given off by the General Insignia which can be used to redeem 5000 standings from the Steel Meridian. 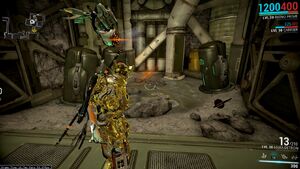 A pair of Steel Meridian Insignias in the same store-room. 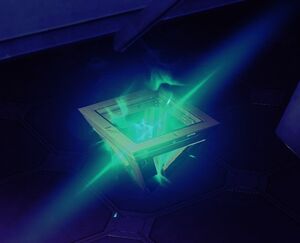 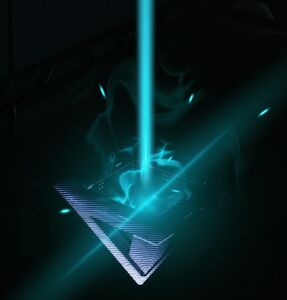 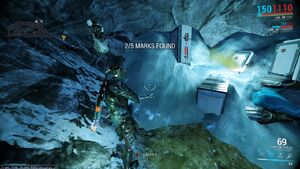 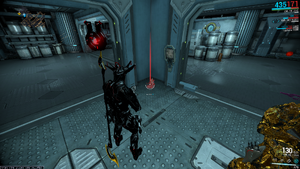 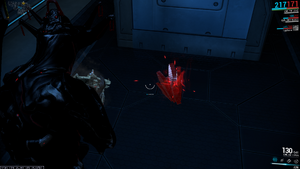 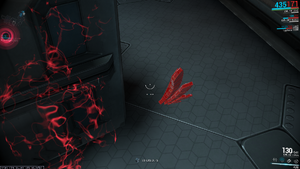 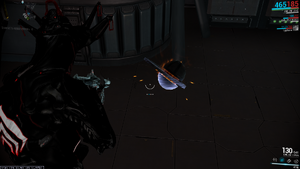 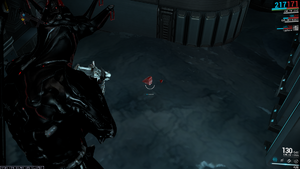 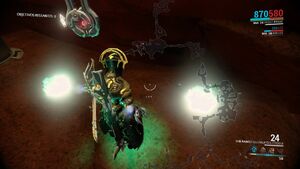 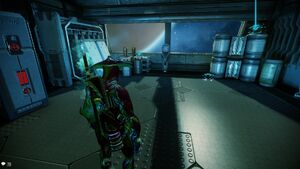 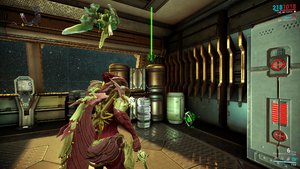 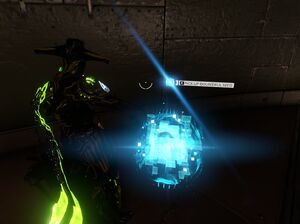 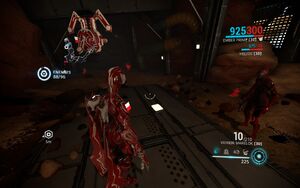 3 Red Veil marks in one room.

Originally introduced in Update 15, the Syndicate system brought new characters (where my Cressa Tal fans at??) and a handful of new goals within the system. Part of that system included the eventual introduction of Syndicate Medallions; unique objects gathered within missions to redeem for their respective Standing.

Fast forward to 2022 and Update 31.5 Angels of the Zariman introduces the Holdfast Syndicate and their respective Medallions; Voidplumes. While the Medallion system itself is not new, the Zariman tilesets spurred conversations around individual vs team wide pickups due to the grandeur size of the tilesets themselves. The feedback we received from the community expressed pain points related to necessary backtracking in order to collect the Plumes, which meant deviating from the Objective and causing longer than necessary mission times in order to collect them all. Similar pain points were what brought forth the squad-wide pickup change to Railjack.

With that being said, Syndicate Medallions (6x Core Syndicates + Angels of the Zariman missions) are now a team-wide pickup, meaning any Medallion picked up benefits the entire squad and no backtracking is required! This also applies to Voidplumes dropped from Angels and Medlica’s Cache to keep everything consistent. We’ve also removed the ability to waypoint the pickups since there’s no need to individually find them.

As an additional lateral change, Riven Challenges for Syndicate Medallion collecting have been changed to be Solo specific and the amount reduced to 8-12 instead of 12-16. Already existing Rivens won’t adopt this change but will instead lose any complicated conditions and just be “Find X Medallions”.

We have made a gamewide change to how Syndicate Medallions spawn in missions - this of course also applies to the latest addition of Voidplumes!

Before: Medallions of all tiers spawn completely at random with no logic attached to it.

NOW: There is now a guarantee that out of the 8 Medallions that spawn in a mission:

There is now far more benefit to finding all 8 Medallions, as you are guaranteed 3 higher tier out of the total 8.

Hotfix 25.7.4 (2019-09-05)
As stated in Update 25.7 (2019-08-29), the Universal Syndicate Medallion is now useable for Ventkids and Simaris Standing! After some internal discussion and player feedback, we decided against allowing the Universal Medallion to apply to Conclave. It didn’t feel right to add a PvE path for a PvP gamemode, especially towards those you have actively played Conclave to get their Standing. Apologies for the chain yank!