"Keep the enemy busy while a fellow Tenno operative raids this ship for supplies. Ready? Trigger the alarms.

Life support has been cut off. They're trying to choke you out. Hold on, I'm sending auxiliary life support."

Survival is a mission type where players will have to fight an endless, steady stream of enemies to survive for as long as possible while slowly losing life support, distracting enemies as a Tenno operative secretly gathers supplies behind the scenes.

At the start of the mission, there is a single terminal. Hacking this terminal will begin the objective, alerting an endless wave of enemies as life support begins to decay from a maximum value of 100% to a minimum value of 0% at a rate of 1% per 1.5 seconds.

Each kill will have a chance to drop personal life support modules that restores 5% of the life support system, up to the maximum value of 100%. These modules may also be obtained from Storage Containers and lockers after the alarm has been triggered.

Immediately upon triggering the alarm and every 90 seconds afterward (with notice given 30 seconds prior), the Lotus will drop off life support capsules that restore 30% life support on activation (up to the maximum value of 100%), spawn a health orb and grant 20 objective affinity to the Tenno that activated the capsule. The amount of life support capsules that can be on the map is capped at 8; another capsule will not be given until one has been opened and the drop delay passed.

After 5 minutes, a mission reward is given to the squad and the extraction point will be enabled and marked on the minimap. The squad can then choose between heading to extraction to complete the mission, or staying on for a longer period of time to receive additional mission rewards every 5 minutes.

When the life support system reaches 0%, if extraction is not available yet, the mission ends in failure. Otherwise, all squad members' health will start draining for 5 minutes, in a manner similar to a hull breach but at a much faster rate. The health drain will stop at 5 HP – making any damage lethal – and teammates who are killed can be revived normally. No more life support capsules will be dropped, rewards will no longer be given, enemies will stop dropping the life support modules, and all remaining life support modules on the map will become unusable. After this point, the mission can still be completed if at least one player reaches Extraction before the 5 minutes are up. After the timer is up, the mission will fail.[1] In addition, the mission will fail if all players die.

Treasure rooms on Deimos and in the Void are inaccessible. However, on the former unique Derelict Vaults exist, and accessing them will spawn Corrupted enemies.

On the Survival mission Taveuni in the Kuva Fortress, the Lotus notifies players that the Grineer are harvesting Kuva which can be intercepted if players so choose. When a life support capsule is deployed, an Eximus unit will spawn, which will drop a Kuva Catalyst when killed, which resembles a red-colored power cell from Excavation missions. Bringing this Catalyst near any life support capsule will automatically turn it into a Kuva Harvester, and a 1 minute timer will count down. This tower, which has 4,000 health, can be targeted and must be defended while also keeping life support above 1% until the timer is over, after which all players will receive 200 Kuva.

This is a list of possible enemies and their respective "wave" they will start to appear. Note that this is based on the lowest level of each faction, at higher level survival missions enemies may come out sooner but usually in the same order.

As players advance through the survival, the amount of Eximus spawns will steadily increase from 0% at 5 minutes, to 20% at 60 minutes.

Besides the bonus amounts of resources, affinity, and mods from the increase in enemies compared to normal missions, certain rewards can be awarded at the end of the mission if the mission is a success. Mission rewards will vary depending on the level of the mission's enemies (the starting level; this tier does not scale during a mission as higher level enemies spawn) and also depends on the amount of time spent. 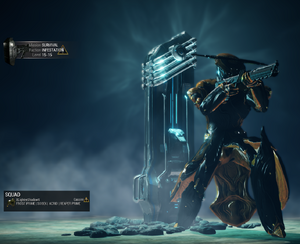 Survival as seen in the lobby (U9) 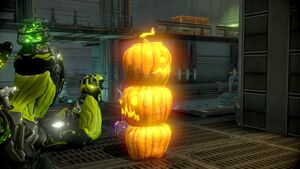 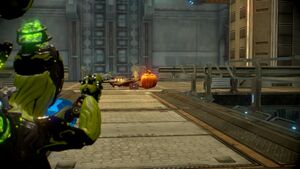 Spawning fixes and tileset tweaks over the past year greatly improved flow by reducing enemy travel time to players, upped the intensity of attackers and grouped enemies together into more tightly packed squads, and increased availability of points during spawn selection. While we're happy with these changes to enemies, one side effect is that survival difficulty drifted over the past few months to where it is now; plentiful large canisters and no reason to use them, even when not trying to stockpile them. We'd like to bring back the original frantic gameplay style of Survival, dashing from room to room while facing hordes of enemies against the clock. We've tried this solo, in small teams and in full squads, everything from Apollodorus to T4 Survival, and as far as we can tell the changes feel awesome. Upcoming Changes:

We'd love to hear your feedback and will continue to test and tweak if needed.

To simulate waves and grouped up enemies, previously survival enemy spawns cycled on and off for short periods of time. While it was a simple way of adding the desired pacing, we found that it was possible for players to get 'in sync' with killing enemies at certain times which left gaps of time where there were no enemies to kill and no enemies spawning, especially in higher level Missions with four players.

Spawning now fluctuates dynamically with each enemy spawned. Max spawn rate is the same, but it's now the time between individual enemy spawns which changes instead of a blanket 'on' or 'off' state for all enemy spawning. Hopefully you will start to see more consistent spawning in higher level Missions with four players, as well as squads of enemies attacking together. In our tests we found that there wasn't a notable difference in low level Missions.

Star Chart node changes have been made to balance the available nodes across factions, tilesets and difficulty. The following nodes have received changes:

Survival missions are here to stay and can be played by choosing Survival Missions on the Starchart. Our Survival weekend gave the team some early feedback on playability and difficulty, and our new Survival missions are ready for your Warframes! Survival missions will get more challenging the further you travel through the solar system. Expect to face lower level enemies closer to the sun, and higher level enemies as you reach the outer planets. The enemies you face will be prepared to take on the strongest Tenno – the longer you play, the higher the stakes!