The New Strange
Replayable
Find the thief Maroo and uncover the secrets of the Arcane Codices.
—Quest Description

Stolen Dreams is a Quest involving the search for Arcane Codices, enigmatic artifacts which several different factions have expressed an interest in.

This quest can be replayed via the Codex.

Lotus tasks the player to search for the mysterious Arcane Codices. Their importance is unknown, but the Grineer had sought it for a potential cure to the Cloning Decay Syndrome that has plagued its faction and the Corpus had sought to strike riches with them.

In search of these codices, the player captures a thief named Maroo who recently stole a piece of the codices and went into hiding. Upon interrogating Maroo, the player finds out that she has been hired by Grineer scientist Tyl Regor to steal them from an Orokin Derelict. However, after the Corpus outbid the Grineer for the codex, she broke her contract and deceived Regor, swapping the real codex with a fake one, and sold the real codex to Corpus hands.

In exchange for protective custody, Maroo reluctantly join forces with the Tenno after cheating the Grineer. Maroo then revealed the locations of the codices, and after a series of Spy missions, the player successfully retrieved all six codices with Maroo's guidance. After Ordis' musings on transcribing the codices, she then informs the player that she had found a machine in the Orokin Derelict from which she had extracted her Arcane Codex. Upon entering an Orokin Void gate on Mars, the player reached the Derelict that housed the enigmatic Arcane Machine. Uploading the codices to the machine yielded a cryptic message, to which the Lotus cannot ascertain its meaning. In confusion, the player returns to their ship, empty-handed, while Maroo sets off in her own path.

This quest is unlocked from the Codex once a player has completed the Phobos Junction.

Expressing an interest in the Codices, the Lotus sends the Tenno to find and capture Maroo, who was hiding in a Corpus base on Tharsis (Mars). The Lotus explains that the Arcane Codices have been a mystery for decades since they were first unearthed, with no one knowing what they are.

As a Capture target, Maroo wields an

Aklex pair and can use

Smoke Screen to turn invisible to evade pursuers. Also, Maroo has the ability to defend herself with her weapons when downed, similar to Tenno, and thus care must be taken when attempting capture.

During capture, Lotus introduces herself to Maroo, and attempts to persuade her that coming with the Tenno is in her best interest.

After capture, the Tenno receive a video transmission of Maroo's interrogation, where she reveals that Tyl Regor had hired her to retrieve the Arcane Codex piece from an Orokin Derelict. Due to her dislike of the Grineer however, she gave the Grineer a fake and sold the Arcane Codex to the Corpus. After being persuaded of the danger the Grineer pose to her, Maroo agrees to the Lotus' offer of protective custody in exchange for revealing the location of the Arcane Codex.

With Maroo's info, the Arcane Codex piece in the Corpus' possession is found to be held in a Corpus Outpost on Unda (Venus). The Tenno are thus tasked with a Spy mission to retrieve the Codex data from the Corpus by accessing three secure Data Vault rooms and hacking them. During the mission, Maroo will inform the player of the basics of this mission: Each Data Vault comes with a wide array of security systems including cameras and trip lasers, and tripping the alarms will cause the Vault to trigger a 30-second data destruction sequence in which the data will be destroyed unless the player can hack the data console. All three Data Vaults must be accessed before extraction can become available.

Once the mission is successfully completed, Ordis states that the Corpus have three pieces of the Arcane Codex, while the Grineer have two, and he muses about the Corpus believing the Codex to lead to a lost Orokin treasure, which piques Maroo's interest.

This time the Tenno are sent to a Grineer Galleon on Pantheon (Mercury) to retrieve two of their Arcane Codices. As with the previous mission, the Grineer have stored the Codices on three separate Data Vaults, which include defenses such as roving Sensor Regulators and

Magnetic energy doors, which can trigger alarms to initiate the data destruction sequence if alerted. During the mission, Maroo mentions that the Grineer believe the Codices will provide them the cure to their genetic degradation, though she dismisses this as wishful thinking.

After successfully completing the mission, Ordis gushes at the perfection of the Arcane Codices' writing, while Maroo quips that even then they don't know what the Codices are.

The next set of Arcane Codices is located on a Corpus Ship on Roche (Phobos), and as with the previous codices are stored on three secure Data Vaults that must be breached with care to prevent alarms.

Post-mission, Ordis realizes that the complete set of Arcane Codices form a code that can only be read by a machine, which he assumes is now unusable. Ordis' musings catch Maroo's attention, who informs him that the Arcane Codex she retrieved from the Orokin Derelict came from some kind of machine. With Ordis hypothesizing that said machine could unlock the code, Lotus sends the Tenno on a mission to find the machine.

The Orokin portal that leads to the Derelict housing the Arcane Machine is located on a Grineer Settlement on Alator (Mars), that unfortunately has been overrun by the Infested. Players must fight through the Infested to reach the Portal room, which will lead them to a Derelict ship. The machine is located inside a large, special room with a pedestal in the middle, where the Arcane Codex can be uploaded. Instead of treasure like Maroo expects, the machine broadcasts an audio transmission with the following cryptic message:

All-All is silent- Hushed-hushed and empty is-is-is the womb of the sky.

All is silent and calm. Hushed and empty is the womb of the sky.

The player will then be attacked by an Arcane Boiler and several Infested units which they must fight off. The Lotus concludes that there is nothing more for them in the Derelict, and instructs the player to extract. Upon extraction, players will be awarded blueprints for an Orokin Catalyst and the

Ordis expresses his confusion at the Arcane Codex not being what they expected and expresses his apologies to Maroo. Despite her dismay, Maroo explains that she is used to low payouts due to being a freelancer, and with the threat of the Grineer gone, she sets off on her own way. 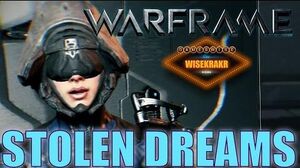