The Star Chart is the interface used to access missions through the "Navigation" segment in the Orbiter. It shows the celestial bodies of the solar system (also referred to as the Origin system). When zooming in or clicking on a celestial body, the player sees how they are linked through Solar Rails Junctions, beginning with Earth, and can select individual mission nodes to play. 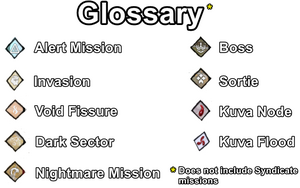 Each planet has its own set of resources and a backstory regarding the faction that is controlling the planet. Some planets may feature more than one faction at the same time.

Besides the mission nodes, some planets have a Relay Node. The available relays differ between the PC/Switch, PS4 and XB1 versions and two of the available relays will be locked behind a Mastery Rank of either 4 or 8. In addition, a derelict Relay called Maroo's Bazaar can be found on Mars and serves as a trading hub for players.

Beyond the 16 accessible planets, moons, and other areas of the solar system, there are two locations which can only be accessed with keys; the Orokin Derelict and the Clan Dojo.

Foreground image of Starchart prior to Update 19.0 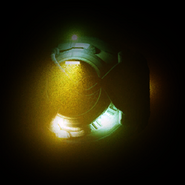 A more relevant and dynamic Worldstate panel is coming! Find out what Events, Quests, Alerts, Invasions and Syndicate missions are occurring at a glance!

Retrieved from "https://warframe.fandom.com/wiki/Star_Chart?oldid=2061780"
Community content is available under CC-BY-SA unless otherwise noted.