Split Chamber is a mod that increases the chance of multishot on rifles by 15% per rank for a maximum of 90% at Rank 5. These additional rounds do not consume extra ammunition. 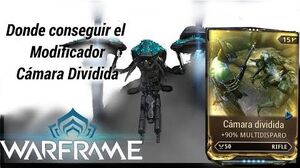 Retrieved from "https://warframe.fandom.com/wiki/Split_Chamber?oldid=2157624"
Community content is available under CC-BY-SA unless otherwise noted.