The Soaktron is a version of the weapon used by Nox modified for the Dog Days Tactical Alert to spray water instead of toxins. While considered nothing more than a toy, it deals "damage" with a reasonable chance of dealing staggering

Impact procs on hit and can be "charged" by pumping it to increase the velocity/ballistic arc of the projectiles, making it easier to hit moving targets. 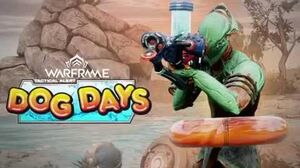 The new Soaktron Rifle Skin is a permanent Customization! Redeem from Nakak for 490 Pearls and give your favorite Rifle a refreshing new look, year-round.

Retrieved from "https://warframe.fandom.com/wiki/Soaktron?oldid=2206756"
Community content is available under CC-BY-SA unless otherwise noted.