Smite Augment: Hold to cast will grant all allies within 15m an additional 100%

Radiation Damage to their attacks for 40s. 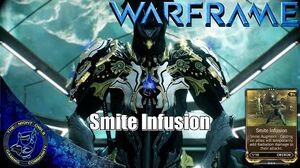