Not to be confused with Amp.

Shotgun Amp is an aura mod that increases the damage dealt with shotguns by 3% per rank, up to 18% at full rank. 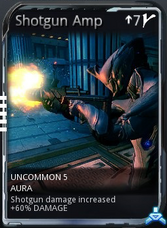 Retrieved from "https://warframe.fandom.com/wiki/Shotgun_Amp?oldid=2110568"
Community content is available under CC-BY-SA unless otherwise noted.