“You're not supposed to be in here! You're going to ruin the surprise!”
The following article/section contains spoilers. Please finish The Second Dream quest before proceeding.

Where is "Smoking Body Ephemera Blueprint"? 5.00%

Orokin Cell 1.29%
Stalker Sigil
Leaf Red Pigment
CODEX
Some have walked these desolate worlds while you have slept. Some like me. I remember what you did. I remember the day.

The Tenno appeared at the Terminus, gleaming and victorious. Our cold and gold Emperors, breathless, bathed you in savior's silk. Then came the sound. Across all our worlds, all at once, the ceremonial Naga drums. A royal salute to the honored Tenno. Ten solemn beats to declare the suffering was over. I watched from a distance, with the rest of the low Guardians. With each beat terror began to crush my throat. The Tenno were not stoic and silent. They were waiting. They were poised. I tried to call out but only a strangled whisper escaped.

When the ninth beat rang a torrent of blood filled the stadium, loosed by Tenno blades. The drums, the Empire, fell silent forever.

Now I hunt, dividing your numbers. Watching from that dark place, cataloging your sins, I am the ghost of retribution. You may forget but you are not innocent.
I am your reckoning!
—Stalker

The Shadow Stalker is an ominous, vengeful figure that infrequently appears during missions, armed with the

War and powerful abilities to hunt down the Tenno. He appears during and after The Second Dream quest. Visually, the Shadow Stalker takes the form of a modified

Excalibur with his own original helmet, and donning the Sentient-imbued Pakal Armor Set.

As seen in the aforementioned quest, the Shadow Stalker was gifted with Sentient powers and equipment by Hunhow, allowing him to adapt to damage continuously as well as releasing new forms of power. This appears to have cost him some of his previous abilities such as

The Shadow Stalker's spawning behavior is identical to his traditional counterpart. The Shadow Stalker can spawn in almost any player-accessible mission with enemies in it, except for Syndicate missions, Assassination missions, Archwing space missions, Open World areas and Sortie Missions. At least one squad member must be marked for death by the Stalker before he will have a chance of spawning.

Stalker and Shadow Stalker are considered the same entity for the purposes of Death Marks; the Mark itself reads "Stalker" in a player's profile regardless of whether the player has completed The Second Dream or not. The following formula is used to calculate if a version of Stalker will spawn:

Shadow Stalker's arrival is heralded by the same flickering darkness and threatening HUD messages as his normal variant; the only difference is that the HUD message window will show Stalker wearing his Pakal armor. After three taunts, the tileset will enter lockdown (where possible), and Stalker will appear in a puff of black smoke before proceeding to attack the targeted player.

If the targeted Tenno is killed, the Stalker (Shadow or otherwise) will kneel and vanish into another cloud of smoke, proclaiming his victory and that justice was served. He may target other Tenno during his assault, trying to kill them one by one. Victory is claimed once all targets have entered bleedout at least one time. If his health drops below 10% before he manages to kill his target(s), he will kneel and flee, announcing his shock at his failure, teleporting away in another cloud of smoke.

If he is defeated (regardless of whether he fled or was killed), he always drops one Mod from his mod drop table, and has a chance to drop further loot, such as a blueprint for one of his weapons.

Imbued with Sentient powers, Shadow Stalker has the ability to adapt to damage from attacks: his health is gated such that upon its hit points falling below a fixed percentage, it will grant 95% resistance to the damage type it has received the most. The Stalker will adapt to damage once per health gate, with the percentage listed below:

Subsequent adaptation will be done in descending order of damage proportion for each health gate. Consequently, Shadow Stalker can only adapt against a maximum of four damage types, and he will still receive full damage from any damage that exceeds their health gate before adapting.

Shedu's pulse on expending all ammo, or

The Vast Untime will remove all their damage resistances. He can still regain his resistances, however the aforementioned abilities and weapons will always be able to remove them.

The Shadow Stalker has been seen cancelling out certain Warframe abilities, particularly self-buffs like Energized Munitions at the instant he is shot with a weapon.

Instead of his classic balanced weapon load-out of bow, knives and scythe, Shadow Stalker solely wields

War instead, which deals more damage than his old

Hate, and is additionally capable of staggering and putting players into the 'lifted' status on hit. He also has two energy orb attacks which he uses after performing a meditative stance within a glowing aura; his first attack is an explosive energy grenade lobbed to the ground, dealing high damage to players caught within its radius, while the second attack is a floating sphere of light that emits laser beams similar to those of a Battalyst while moving towards the player. Shadow Stalker also uses

Rhino Charge to move around and knock targets off their feet, and he can cast sword beams similar to those from

Exalted Blade, which can push back players if they hit. 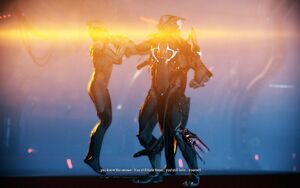 The Shadow Stalker inside a cutscene. 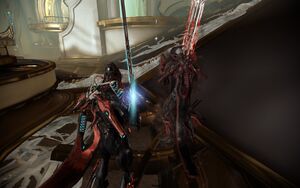 Comparison between default colored Pakal Armor/Syandana and the ones used by the Shadow Stalker in-game. 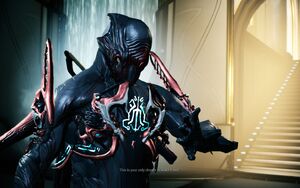 From this perspective/In this scene the Shadow Stalker seems to miss the brighter red line running between the darker ones, and his shoulders aren't black either. 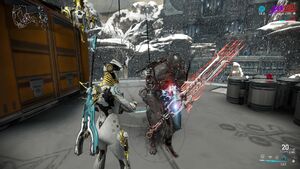 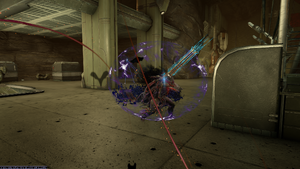 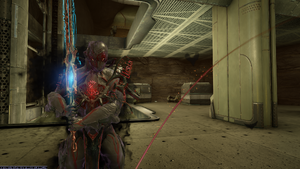 Close up of Shadow Stalker. 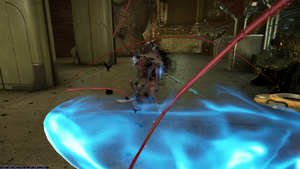 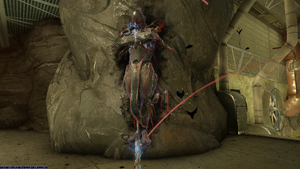 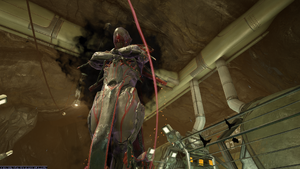 Looking down upon you. 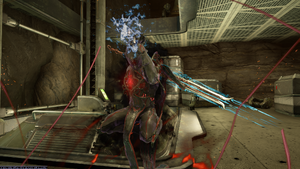 Shadow Stalker using energy grenade attack. Note that he doesn't absorb damage during this attack, merely invulnerable to it. 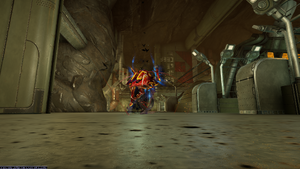 Since the Old Blood update, Shadow Stalker can now apply the 'lifted' status to players. 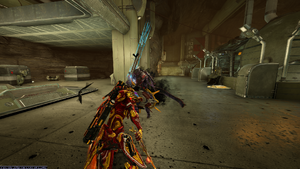