The Sepulcrum is an Orokin Era weapon created by the Entrati, a burst-fire explosive sidearm that builds charges on kills to allow use of the Alternate Fire, a lock-on missile barrage.

Sepulcrum is acquired by reaching Rank 2 - Acquaintance with the Entrati. Father sells the main blueprint for 4,000 Standing

8,000 is needed for all parts. The main blueprint is also offered as a rank-up reward.

Additionally requires Rank 0 - Neutral with Solaris United and Rank 1 - Offworlder with the Ostrons in order to acquire Travocyte Alloy and Coprite Alloy respectively required in its construction. 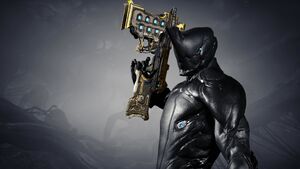