Seismic Palm is a stance mod for fist weapons like the

Furax. It features staggering and knockdowns. 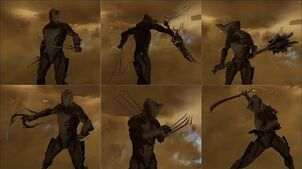