Shuriken Augment: Hits expose weaknesses on enemies, reducing their Armor by 70% for 8s.

Seeking Shuriken is an Ash

Shuriken to temporarily reduce the armor of their targets. 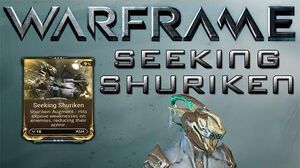