Saya's Sigil is a solo-only quest introduced in Update 22.0 (2017-10-12), revolving around the mystery behind a long-lost Eidolon researcher and the Ostron people. Completing this quest will reward players with the blueprint for the

Players must go to the waypoint marked on the Plains, located to the west just outside of Cetus walls. There, they will encounter a Grineer drilling operation where they are apparently looking at Onkko's research. Councilor Vay Hek then contacts the Tenno, irritated at their involvement with the Ostrons, and the Lotus mentions how only Hek would lead outmatched Grineer to their deaths against an Eidolon, with Vay Hek gloating that he will gladly send more to their deaths for a chance at killing the Lotus. Then the Grineer will start dropping in reinforcements to the dig site. Players must eliminate all enemies that arrive within the dig site, whose area is denoted by a red circle on the minimap.

Back in the Orbiter, Lotus asks the player to examine the coffer using the Codex, which automatically brings up a close-up view of the box. The Lotus, seeing the box's lock is damaged, suggests forcing it open. Saya, however, explains that the box is protected by a Shatter-lock, which uses a glass key that was broken, and that forcing it open would only destroy the contents inside. She suggests rebuilding the glass key instead, and the Lotus will send the player 25 Codex Scanners in their inventory for use in locating the Shatter-lock's shards out on the Plains.

At this point, Vay Hek will transmit his intention to retrieve the glass shards, as he believes it to be the key to unlocking a power that can defeat the Sentients. Multiple enemy reinforcements will then arrive in the camp, and the player must kill all Grineer within the camp. In particular, a Tusk Bolkor assault transport will fly in to provide close-air support for the Grineer, and players must destroy it in order for the Lotus to extract them. Once it is destroyed, an extraction waypoint will be provided nearby.

Tracking an off-world shipment of supplies to a Grineer ship in orbit, the Lotus surmises that Hek would bring any shards he's found there and asks the Tenno to infiltrate it.

Arriving at the Grineer ship, the Lotus finds her scans are being blocked, making her unable to scan for shards. Saya mentions how she and Onkko discovered that the shards respond to a unique harmonic, and laments that they can't subject the ship to a wideband harmonic. The Lotus, however, claims that she can do so, and subjects the vessel to a broad frequency sweep, visible as blue pulses of light passing through the ship. With the fragments located, Konzu discusses how Saya and Onkko's work was beneficial for Cetus, and Saya explains that it came at the cost of their personal relationship due to their dedication to Cetus.

The objective in this mission to find a vault holding the shard marked by a waypoint. Along the way, players will enter a shuttle bay room, at which point the Grineer will launch an ambush led by a Nox, which players must defeat to proceed. The Nox is a highly dangerous enemy, firing toxic sludges that can slow down the player, and takes significantly less damage anywhere on its body except for its head. Once players reach the designated vault, they must hack the marked console, which will automatically grab the shard, allowing them to go to extraction to finish the mission.

Saya points to Vay Hek digging in the Central Plains, where Onkko once found some artifacts, and surmises that the last piece of the lock is there. This makes Konzu and Saya reminisce over a past memory involving Onkko, causing Saya to realize where they should look for the last piece. Saya suggests waiting until nightfall, as there won't be any Grineer patrolling the plains then.

Epilogue I: The Orbiter, Earth Orbit[]

“You're not supposed to be in here! You're going to ruin the surprise!”
The following article/section contains spoilers. Please unlock The Quills before proceeding.
View Spoilers ▾▾ 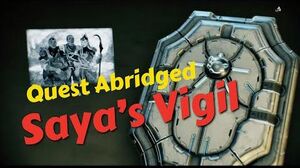 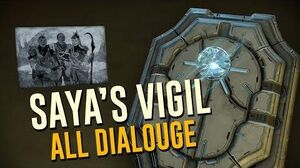 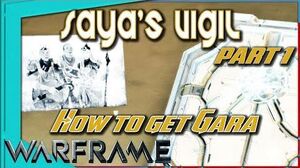 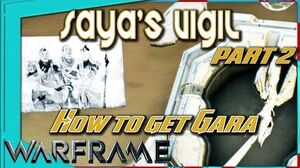 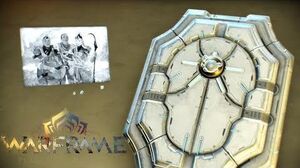 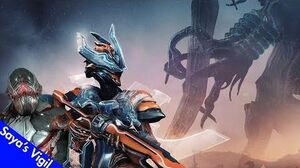