Sapping Ospreys are Corpus Ospreys that deploy an orb which generates an AoE damage field. The orb releases pulses of damage over several seconds, then floats approximately 2 meters into the air for a final detonation.

Old model of Sapping Osprey, before it got skin and name change. 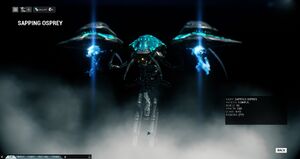