In the simulated universe of the Sanctuary, my data-immortals have fought each other countless times. Through this violence, I have studied and documented their true character. But my study cannot be complete without the power of the Tenno, the most powerful specimen in the system — you. Your duty in this experiment is to kill as many specimens as efficiently as possible. In this chaos, the true nature of these creatures will be revealed... as will yours.
—Cephalon Simaris
Challenge my specimens within the construct and enlighten me. I will reward you in kind.
—In-Game Description

Sanctuary Onslaught is an endless game mode introduced in Update 22.18 (2018-04-20). The objective is similar to Survival missions, where players must last as long as possible by continuously killing hordes of increasingly difficult enemies, as quickly as possible.

Players are limited to one large room from a random tileset in every zone. In order to advance through the zones, players must maintain efficiency by constantly killing enemies, then entering a conduit at the end of the zone's time limit in order to progress to the next. The opposing faction of enemies encountered in each zone is also randomized on a per-zone basis.

Upon starting the mission, players will have to enter a conduit and maintain efficiency meter against increasingly difficult enemies. Each enemy killed in the process will contribute to the overall efficiency, with Eximus enemies contributing more.

Every zone lasts for 2 minutes and 30 seconds. When a zone is complete, Simaris will open a Data-Conduit to a new and harder zone within his Sanctuary. The conduit closes after 30 seconds. Players who have not entered the conduit before then will be extracted with their rewards.

Simaris has his own rules within his sanctuary, as he seeks to produce an accurate experiment. These are the following rules:

Rank yourself among Hunters by facing the most elite specimens of Sanctuary.
—In-Game Description

Elite Sanctuary Onslaught is a higher difficulty mode of Sanctuary Onslaught. In addition to featuring stronger specimens, tilesets and enemies are predetermined every week, and usage of Warframe abilities must be staggered or they will become temporarily disabled. 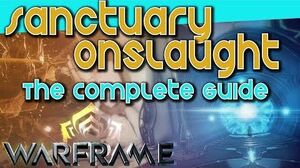 Hotfix 22.18.8 (2018-04-28)
Sanctuary Onslaught Changes:
We still see Onslaught as a more bite-sized gameplay experience, but combined with the efficiency changes below, how far your team can last should be dictated slightly more by your ability to kill instead of hard numeric limits. The Simulation is alive and ever changing.

Hotfix 22.18.7 (2018-04-25)
Sanctuary Onslaught Balance Changes:
Player experiences and data determined that enemy scaling was broken and not consistent with game modes outside of Onslaught. A more descriptive and in-depth read can be viewed here: https://forums.warframe.com/topic/950011-sanctuary-onslaught-difficulty-changes/