Magistar
CODEX
Each charged attack turns the enemy's pain into a healing pulse that washes over allies. Also, creates resistance to status effects when held.

The Sancti Magistar is the Syndicate variant of the

Magistar, available from New Loka. It has the unique ability to heal the wielder and nearby allies when connecting with a heavy attack, and also gives a chance to resist status effects when it is wielded. 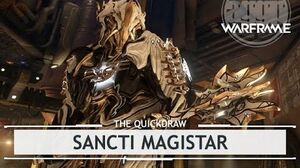 Retrieved from "https://warframe.fandom.com/wiki/Sancti_Magistar?oldid=2085259"
Community content is available under CC-BY-SA unless otherwise noted.