Infiltrate the enemy hold, and cripple their operation by striking at vulnerable points. The Minimap will lead you to the target. Once it has been destroyed, get to extraction as fast as possible.
—In-Game Description

Sabotage is a Mission type requiring players to reach an objective, and then destroy it before heading to extraction. The objective that needs to be destroyed differs depending on the mission's tileset.

Core sabotage missions have a chance of triggering a five-minute Timed Extraction event upon completion via the overhead message "Core Integrity Compromised". The mission will fail if players do not extract within the time limit.

Missions in the Grineer Forest initially task players with finding a Toxin Mixer and destroying the Biocatalyst required for the creation of the Cicero Toxin. If players in the squad have Antitoxins in their Gear wheel, they may put them into the Mixer at this stage, granting the squad an additional reward at the end of the mission depending on the combined potency of all antitoxins used (as indicated by Antitoxin Strength) prior to commencement of the second mission stage. Objective Affinity is awarded upon Biocatalyst destruction which scales with mission level, up to a maximum of 4000 affinity.

Once the Toxin Mixer has been disabled, players are then tasked with sabotage of the Toxin Injector poisoning the soil.

Regardless of the sabotage outcome, players must defend the Injector from enemies for 75 seconds in order to complete the second mission stage.

Introduced in Update 18.5 (2016-03-04), this Sabotage variant replaces core sabotage on the Grineer Galleon and Corpus Ship. In this mode, the player must sabotage up to two coolant stations of the reactor before destroying the reactor itself.

Missions in the Grineer Sealab require players to flood the main pumping room by destroying its pipes and then hack and defend a terminal. Depending on the type of lab, players are then required to either find and kill a Manic Bombard, or destroy cloning tubes and a research drone.

Missions taking place onboard Infested Ships require players to destroy three Infested Hives, that are protected by five Infested Tumors each; these must be destroyed before the hive can be harmed. Each destruction of a hive will increase the Infested spawnrate as well as triggering an environmental hazard, depending on the type of Hive destroyed. The hazards range from Lowered Gravity, Laser Hazard, Turret Activation, Cryogenic Leakage,

Orokin Sabotage takes place on Orokin Void and Orokin Derelict tilesets, where the objective is to close a Void portal allowing Corpus or Grineer troops entry into the Orokin structure. Closing the portal involves a mixture of Defense-style gameplay and Assassination where a special miniboss must be killed in the process.

Taking place on the Archwing Trench Run tileset, this mode sees players fly through a severely damaged Corpus Ship to destroy the reactor core. The reactor room has eight Auxiliary Power Cores that must be destroyed to expose the two larger Primary Power Cores that are the main objective. Deadly crisscrossing

Electricity beams activate whenever each auxiliary core is destroyed, making the area more hazardous. Unlike most other Sabotage variants, no affinity is rewarded for objective completion in this Sabotage variant.

Fomorian Sabotage is a special Sabotage Event variant that involves using Archwings to engage and destroy a Balor Fomorian before it reaches a Relay. Each Fomorian Sabotage mission has a timer displaying the time until it reaches the relay, along with a health counter showing the percent of health it has remaining.

In order to participate in a Fomorian Sabotage mission, a player must have an Archwing available, as well as a Fomorian Disruptor equipped in their Gear menu.

Formerly a mission type that phased out in Update: Specters of the Rail 0.0 (2016-07-08), this was changed into a Sabotage variant, then demoted to the first of two objectives in Grineer Settlement and Grineer Shipyard sabotage missions. The deception objective, which consists of inserting a datamass into a specific terminal, rewards up to 4000 objective affinity based on mission level.

Many kinds of Sabotage missions contain Resource Caches. For each cache collected, the squad will earn up to 2000 affinity (based on mission level) as well as additional rewards depending on the kind of Sabotage mission. Like Spy Mission Vaults, these additional rewards will not be revealed until the mission is completed. On the mission completion screen, cache rewards will be marked with "Identified". 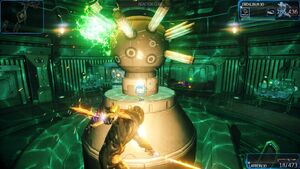 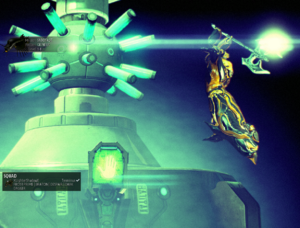 Sabotage as seen in the lobby (U9)

These Changes & Fixes relate directly to if the Reactor Sabotage ‘magnetic’ situation is triggered: