CODEX
Scope out the enemy with this long-range revolver style rifle.

The Rubico is a revolver-styled Sniper Rifle released in Update 18.0. It currently boasts the highest critical damage multiplier of all available sniper rifles at the expense of status chance. 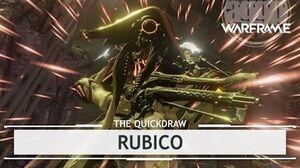