“You're not supposed to be in here! You're going to ruin the surprise!”
The following article/section contains spoilers. Please complete Chimera Prologue before proceeding.

CODEX
"Known and unknowable. This thing has haunted my life, waking and asleep, ever since I made that accursed bargain. A parasite at the core of my city. It drains my wealth, my power, my reactors... and my dignity.

This will not stand. I will see that horrendous thing destroyed.

The Ropalolyst is a gigantic bird-like Sentient boss capable of flight. It can be found in the Remastered Corpus Gas City on its own Assassination node on Jupiter, requiring players to have completed Chimera Prologue to battle it. It was dispatched by the Sentients to ensure Alad V does not double-cross their "partnership", much to his displeasure.

After defeating the Ropalolyst, the player will receive

Wisp component blueprints and an Amalgam mod from five possible.

Despite Digital Extremes' statement that the Sentient is a Flying Eidolon, no in-game material refers to it as such, leaving its classification unknown.

Mask of the Revenant[]

A vision comes, something new is stirring within the ground. Seeking a body to call its own; longing to strike those who sent it to the grave.
—A New Threat Looms Fragment
A fragment of the ancient Sentient that once terrorized these plains.
—A Terror Long Forgotten Fragment

Although perhaps not the same Ropalolyst, a spectral silhouette of the same Sentient breed can be seen briefly emerging from Gara Toht Lake in the Plains of Eidolon. Nakak explains that a Warframe served as a Warden to keep the sealed Eidolon at bay, until one day he foolishly tried to make contact with the Sentient. Realizing the Sentient was using him as a means to free itself, the Warden cast himself into the lake. The time spent as an "anchor" to the Sentient would infuse the Warden with its eldritch energies, transforming him into the

Whether this is the same or different Ropalolyst with the one found on Jupiter remains unknown.

After the Sentients tricked Alad V into forming an unwitting partnership, the Ropalolyst was stationed on his Gas City in Jupiter, threatening to destroy his city if he does not comply to create Amalgams for the Sentients.

During the battle with the Ropalolyst, Natah calls it her "other flesh" and tells the Tenno that its sacrifice will make way for the Amalgams to live. Meanwhile, Alad V actively encourages and even expresses gratitude to the Tenno as they fight.

Outside of its assassination node, the Ropalolyst can occasionally be seen outdoors, causing destruction to the city and leaving debris in its wake before flying off. The Ropalolyst cannot be attacked during this state.

During the assassination mission, the Ropalolyst is capable of flight. When grounded, it can walk on its blade-like "wings". It uses a variety of energy-based projectiles, and can even grab the Tenno with its claws.

The Ropalolyst engages the Tenno while hovering in the air. There are three capacitor towers surrounding the main platform. Approach one of the towers, taking care to avoid the Electric Stream, and wait until the Ropalolyst fires its Giant Laser, luring it to hit the tower and supercharging it.

The Tenno must also deplete the Ropalolyst's shields using

Void damage, have no effect on the Ropalolyst.

Grounded, the Ropalolyst will stomp around using its blade-like wings and use its Seeking Missiles and Grab and is reinforced by a small group of Amalgams. The two Ropalolyst Synovia on its hind legs become vulnerable, destroying one of them will temporarily stun it, allowing it to be vulnerable to the Terren Charger, a massive laser that is activated by a terminal on the main platform. If the Tenno take too long to activate the laser, any destroyed Synovia will fully regenerate.

Once injured by the Terren Charger, the Ropalolyst will resume flight. Simply repeat the above steps two more times until it dies. On the third grounding, Battalysts and Conculysts will appear instead of Amalgams, and the Ropalolyst's entire body becomes vulnerable to damage. 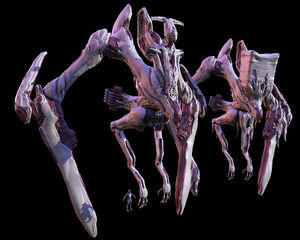 Revealed in Devstream 100. Size comparison with

Excalibur. The Ropalolyst model on the right had its lost head replaced with a piece of Temple Flesh. 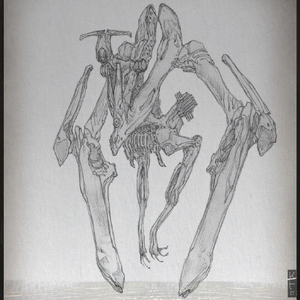 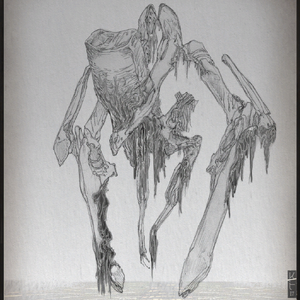 Revenant Fragment "A Terror Long Forgotten", depticing a fusion with a piece of the Unum blubber 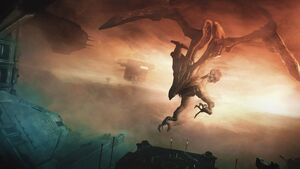 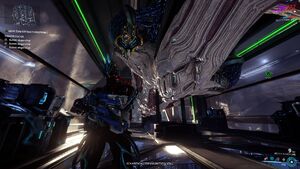 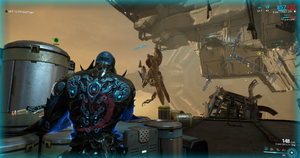 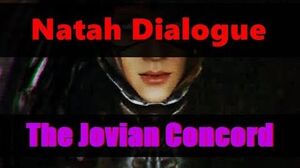 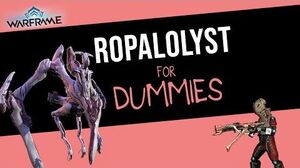 Warframe How to Defeat the Ropalolyst SOLO! Wisp Farming Guide!-1 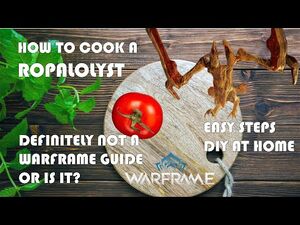 How to Cook a Ropalolyst, Definitely not a Warframe Guide or is it?