Cephalon Samodeus' grand creations. Each mod is malleable and unique, inspired by and meant for a single weapon. Complete a Riven Mod's challenge to unveil its possibilities, both rapturous and unfavorable.

Riven mods are unique amongst other mods in a variety of ways:

Players start off with 15 inventory slots for Riven mods, which can be increased by purchasing 3 slots for

‍2,700). Receiving a Riven mod while being at the current limit will block access to any further Sorties, and the player will be given a choice to purchase slots, trade away a Riven mod, or dissolve a Riven mod of their selection.

A single Riven mod is given to players upon completion of The War Within quest. Additional Riven mods can be acquired from:

Riven Mods can also be acquired by collecting

Riven Slivers, which can be obtained as rewards from opening Requiem Relics, as a Railjack Mission reward, or by killing eximus units in The Steel Path. Once enough Slivers are collected, players can then visit Palladino on Iron Wake, where she can then transmute the Slivers into a complete Riven Mod. Each mod requires 10 Riven Slivers to create.

), Mastery Rank requirement (chosen between MR8-16), attributes, and have between two and four attributes. It is possible to have Rivens to grant a very powerful set of bonuses with a negligible (sometimes even beneficial) curse and vice-versa (e.g. Soma Sati-critatis with a curse that reduces undesirable

Riven mods draw their names from a size pool of 31, indicated by the randomized/rerolled attributes that the new mod has. Names consist of a prefix and/or a core and suffix and follow "Prefix-CoreSuffix" or "CoreSuffix" pattern.

M : Melee weapon ; P : Primary weapon ; S : Secondary weapon ; if not no precision : all the 3. it does not include Shotgun, Sentinel weapon, Archwing weapon, the value could be different.
*Melee/Zaw-exclusive attributes
†Positive values only

—In-game Description
The randomized attributes for Riven mods are affected by Disposition, a stat multiplier provided by the system that collates the usage popularity of a given weapon across the entire player base. Disposition strength controls the range of the attributes available for each weapon. Disposition can be any value between 0.5 and 1.55, but in-game this is simplified to 5 categories:

Prime variant at 1.15. However, the standard

Boltor has a different disposition at 1.25.

For Modular Weapons, the disposition is tied to the Main Component of the weapon, i.e.: the Strike for a Zaw, and the Chamber for a Kitgun Secondary or Primary. For Kitguns, the Disposition of the Chamber can be different for Secondary and Primary versions.

Below is a list of Weapons, Zaw Strikes and Kitgun Chambers by Disposition:

Cycling a Riven mod starts off with 900

‍900 Kuva for the first cycle and increases on subsequent cycles of the same mod, capped at 3500

‍3500 Kuva. The number of cycles is indicated by a clockwise arrow at the bottom right of the Riven mod.

‍15,050 Kuva can be saved by rolling an unrolled Riven instead.

Eidolon Hydrolyst
If a player has excess Rivens and are comfortable with doing away with several of them, a Riven Transmuter allows them to sacrifice four Rivens in their inventory for a new, veiled Riven mod. 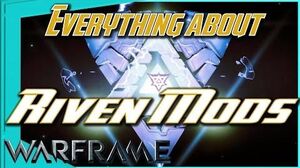 When we introduced separate Dispositions for each weapon variant back in November 2019, we planned to give new weapons a Disposition of 1 (the “average”), or matching the lowest member of the weapon family if it already had a Disposition lower than 1. Unfortunately, this meant that powerful new weapons (like the Kuva Lich collection) might have Rivens that start too strong, forcing reductions in accordance with our balance methodology.

In order to prevent this situation, we will be changing this policy: going forward, all new weapons will be released with the minimum Riven Disposition of 0.5. For The Deadlock Protocol, this includes the Dispositions on newly added Primary Kitguns, in addition to regular weapons (secondary Kitgun Dispositions will remain as-is.)

Retrieved from "https://warframe.fandom.com/wiki/Riven_Mods?oldid=2157972"
Community content is available under CC-BY-SA unless otherwise noted.