Resource Caches are special Grineer, Corpus, or Orokin lockers which can appear in certain missions and contain uncommon or rare rewards not found in normal lockers, such as Mods.

They are identified by their white glow instead of the green glow of unlocked standard lockers. Resource caches are usually located in hard-to-access or hidden locations, sometimes in secret rooms not shown on the minimap. These caches will also emit a distinct audible hum that can be used to determine if a cache is nearby.

Unlike normal lockers, Caches can also be located with loot radar which is provided by individual

Animal Instinct mods or the

Loot Detector Aura if equipped by any member of the squad. However, they use the same icon as regular storage containers and resource drops, requiring a somewhat thorough search nonetheless. One other tip that can also help find them: combine Loot Radar mods, a weapon with wide AoE explosions that can penetrate walls and a loot-pull mod like

Vacuum, and with constant shots clear out everything you can including through walls. If you see a Loot object on the radar stay put while other loot near it got collected, that is a Cache.

Missions with resource caches will always have three caches present. Once a cache is opened by any squad member, the reward will be given to every squad member regardless of proximity. However, rewards will remain unidentified until extracting from the mission, whereupon cache rewards will have an "Identified:" tag. The potential rewards themselves will vary depending on the mission. Despite the implication that the reward is picked up from the cache, rewards are instead granted based on how many caches the players find; opening one cache gives a common reward such as a Credit Cache. Opening a second cache will provide a second, rarer reward, and opening all three will provide the chance for the rarest rewards, including small chances for Orokin Cells, Nitain Extract, Forma and, exclusively, blueprints for the Xiphos Landing Craft.

Resource Caches were first introduced in Operation Gate Crash, and were present in all of its missions. Currently, only the following missions have Resource Caches present:

Syndicate missions will not have caches, since they conflict with Syndicate Medallions.

Caches also appear in the "Cache Recovery" objective in Bounties on the Plains of Eidolon and Orb Vallis, however they don't drop unique loot upon opening.

The Halloween 2014 Alert also featured Resource Caches, however the lockers found in the alert were visually modified to be surrounded by jack-o-lanterns, and have orange lights instead of white. 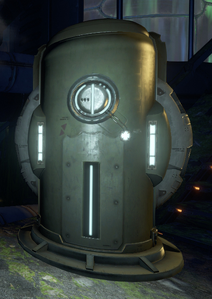 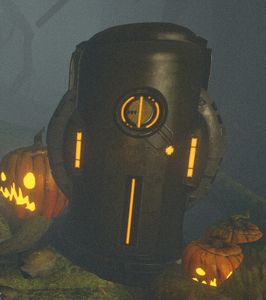 The Halloween 2014 variant of the Grineer Resource Cache. 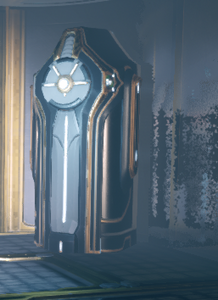 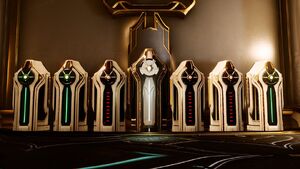 An Orokin Resource Cache along with other normal caches.