Sound Quake Augment: Forgoes channeling to create a shockwave that deals 20x Damage at the epicenter, gradually weakening as it expands out. 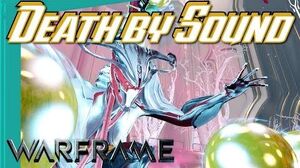