A valuable ally has been captured by the enemy. Infiltrate their stronghold and search for the prison. Once there, hack the door and free the prisoner. Be warned, the prison cell has been rigged with a killswitch. If the Wardens detect an intrusion they will start an execution sequence. Failure to recue the hostage before that sequence finishes will result in their termination.

Once the prisoner is free, they will begin to follow the Tenno. Protect them and get them to extraction.

Tenno can choose to give the Rescue target a weapon to help defend themselves. Walk up to the target and press X  to give them your Secondary Weapon.

Rescue (version 2.0) is a Mission type requiring the player to locate a hostage and escort them to extraction without alerting the base's security.

On Grineer and Corpus rescue missions, the objective is to free the hostage without alerting a group of patrolling Wardens. The hostage is in a room patrolled with Wardens with multiple prison cells, half of which are locked, and the rest hackable; the hostage will be in one of the hackable cells. Alerting a Warden will cause them to activate an alarm sequence, this action will call in significant numbers of enemy reinforcements and start the execution timer; failing to rescue the target within the time limit will kill the hostage and fail the mission. Upon reaching 15 seconds left on the timer, the hostage will bang on the door of the cell they are locked behind, followed by them calling out to the Tenno, alerting the Tenno of their location.

On Infested rescue missions taking place within Infested Ships, the hostage will be trapped in one of many airlocks, whose doors are covered by Tumor Nodes. Players have to first destroy the Tumor Node covering a door before they can open it to check whether the hostage is inside. Additionally, laser traps will be scattered throughout the room which will make the Tumor Nodes gas the airlock if tripped, resulting in a countdown timer similar to the execution timer for Corpus and Grineer prisons. Tripping a laser trap will also activate large pulsing orbs scattered throughout the rest of the level that reduce shields and drain energy upon contact, identical to those initiated when killing a Pulsing Infested Hive during a Hive Sabotage mission, potentially making the mission more dangerous.

Rescue missions feature a large tile that serves as the map's Prison Complex. Inside this tile is the actual cell block, which holds four to eight cells in which the prisoners are jailed in. This cell block is normally accessible via a large frontal gate, which has to be hacked in order to be opened, all while possessing a significant number of static defenses like Arc Traps or Laser Barriers and Turrets. The complex will also see a number of patrolling Wardens and other enemy units.

The prison complex features many hidden pathways, tunnels and raised catwalks that can be used to hide from patrolling enemies, but requiring parkour to reach. Additionally, the cell block itself can be accessed via said alternate paths, bypassing the need to breach the large frontal gate.

Variations on the Prison Complexes exist:

Once the hostage is free, the hostage will follow about 10 to 15 meters behind the Tenno closest to extraction, occasionally taking advantage of cover. If said Tenno is on an elevator, the hostage will usually get onto the elevator instead of lagging behind. Their speed is just about equal to most Tenno and possess most of the basic maneuvers such as bullet jumping and crouching.

Armed hostages prefer to attack enemies and take cover rather than follow as much as possible, so arming them may or may not be in the player's best interests depending on the faction the hostages are rescued from. Still, they can prove to be dangerously effective with weapons such as the

If a hostage's health is depleted, they will enter a bleedout state similar to what happens to Tenno, giving 20 seconds with which players can revive the hostage. Failing to revive the hostage when the bleedout period expires will result in the hostage dying, resulting in a mission failure.

The hostage tends to get stuck on obstacles such as short pathways and boxes. If freeing the hostage is impossible via normal means, players can simply put distance between them and the hostage, which can trigger the hostage's auto-teleport feature to bring them back to the Tenno's side. If this is unsuccessful, a recommended course of action is to blaze toward extraction as fast as possible, making sure to kill every enemy in the way. The hostage must simply be alive at the moment when the Tenno reach extraction; it is unnecessary for the hostage to be at the extraction for the mission to complete.

Besides normal mission rewards, players are rewarded with blueprints for Specters upon completion of the mission, with the specter type dependent on these three achievements;

Below are the Specter blueprint rewards for each difficulty level and achievement counts:

Specters are deployable, single use Tenno holograms equipped with gear chosen by the player, which can simply lend a hand in difficult missions. 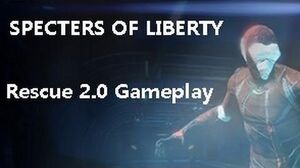 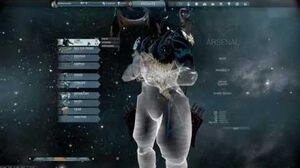 Retrieved from "https://warframe.fandom.com/wiki/Rescue?oldid=2007359"
Community content is available under CC-BY-SA unless otherwise noted.