Reloading occurs when the player attempts to fire a non-melee weapon with an empty magazine, or if the player presses the manual reload button with less than full ammo left in the clip. While the reloading animation occurs, the player cannot attempt to fire the weapon. The length of time spent on reloading is based on the individual weapon's Reload Speed, which can be altered by mods. Reload time functions as a period of disadvantage for the player, and the reloading process can be interrupted by actions like rolling, hard landings, being knocked down, meleeing, and using non-one handed abilities. However, other actions can still be taken to compensate for the inability to shoot.

When firing a weapon until it is empty, the game does not actually immediately initiate a reload. There is a short but very real delay of roughly half a second,[1] which significantly reduces the sustained DPS of a weapon. This delay can be averted by pressing the reload key as soon as the weapon's magazine is about to run out, assuming the firing trigger is being held down or rapidly pressed in the case of semi-auto weapons. All of the following calculations on reload speed's effects on DPS are only accurate assuming that manual reloading is being used; otherwise, your benefit from using these mods will be diminished.

For balancing purposes (especially in the case of Riven Mods where effects of over 100% are achievable when used with regular mods), the total "Reload Time" of weapons is not targeted by mods; Having 100% "Reload Speed" on a 2 second reload weapon does not make reloading instant, but instead makes the weapon reload twice as fast, resulting in a reload time of 1 second.

Braton with a 2.0 second reload time and a rank 5

Fast Hands (+30% Reload Speed) would have a new reload time of:

Note that while you may successfully install both Quickdraw and Stunning Speed onto a single sidearm with no discrepancies,

Fast Hands cannot be placed onto a weapon with

Primed Fast Hands, and vice-versa. Bows, snipers, and launchers benefit from the Rifle-type reload mods. In addition, there are some

The mods listed below don't affect reload per se, but makes the weapon gradually reload while it is holstered. These mods can be used in both PvP and PvE:

Charm has a chance to give the player an instant reload buff. This only occurs for one reload.

Toxin damage with a 100% status chance. 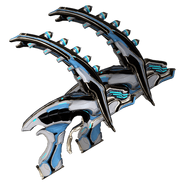 Akarius
(Reload faster while sprinting, even faster when wielded by 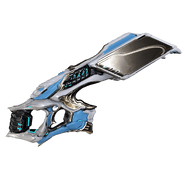 Acceltra
(Reload faster while sprinting, even faster when wielded by

Pandero
(When used by 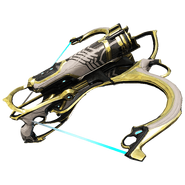 One-Handed Actions are actions that can be done while reloading or charging. They are called such because the animations to cast these abilities generally use up to one hand each, leaving the other hand free to reload weapons. This does not imply that all ability animations which show only one hand doing things are one-handed abilities; it only refers to the fact that a hand is still able to be reloading a weapon while the ability is being cast. One can take advantage of this mechanic to further increase their efficiency and flow of actions.

Players looking to achieve as high as single-target damage as possible might wish to consider the effects of reload speed modifiers on their weapons. Burst damage considers damage as an instantaneous sample of averages, relying purely on the damage dealt by each attack and how many attacks can be dealt per second. Sustained damage, on the other hand, relates to encounters that last beyond a single clip and therefore must include reload time into its average.

Currently, modding for reload speed is a poor choice on almost every weapon in this regard, due to the opportunity cost of using the same mod slot for elemental damage or the like. There are some conditions where reload speed can be considered valuable, however.

Sustained DPS works as a function of total damage dealt over the combined period of firing the weapon and finishing the reload. If the combined period is split into two parts, then an increase in either can be easily compared the other. For example:

The Viper is a rare instance of a weapon with nearly-equal firing and reload times. The vast majority of weapons have a greater percentage of time spent firing compared to reloading. Furthermore, as players progress in the game, their limiting factor becomes mod slots, not mod capacity, and so a more apt version of the above comparison would be a rank 5 Gunslinger (at 9 capacity) where its 72% increase in fire rate far outperforms the 48% increase in reload speed. Only weapons where the reload time significantly dominates the firing time (the Tigris, for example, spends 1 second shooting and 1.8 seconds reloading) should one even consider choosing Reload Speed mods in opposition to Fire Rate mods.

Magazine capacity increases the amount of ammo in a single clip while keeping fire rate constant. Therefore, if any weapon of any fire rate has its magazine of any capacity increased by 60%, it will take 60% more time to finish off its clip, except for rounding discrepancies, or weapons with spool-up. Because sustained DPS considers both the time spent firing and the time spent reloading, magazine size also acts nearly identical to reload speed, by reducing the percentage of total time spent reloading as opposed to firing. For example:

Without even calculating the resulting DPS, it can be shown that a 30% increase in magazine capacity has almost the same effect as a 30% increase in reload speed. That means that, if ever in the situation to choose between the two effects, consider the other factors.

Retrieved from "https://warframe.fandom.com/wiki/Reload_speed?oldid=2010449"
Community content is available under CC-BY-SA unless otherwise noted.