Welcome to the Relay! Explore and meet with fellow Tenno. Mastery Rank 3 or higher players can access Syndicate rewards. Stay tuned for Baro Ki'Teer visits with unique items!
—Relay Chat opening message
While the major warring factions combat each other across the Origin System, non-militant organizations and civilian merchants populate the many regional Tenno Relays. Travelling merchant collectors that offer rare goods, mentors that offer training and knowledge, and convictional syndicates that preach their own rituals and doctrine.
—Citizens Fragment

Relays are colossal Tenno architectures, which serve as hub stations where players can interact with each other, as well as do business with Syndicates and various dealers. It was added in Hotfix 15.5.3 (2014-11-28) for stress testing and as of Update 15.6 (2014-12-11) is available to all players across multiple Planets.

Relays are accessible by selecting a planet with an available relay in the Navigation Console, and then entering the relay node as one would enter a mission. During the Operation Eyes of Blight event, certain relays were destroyed by Balor Fomorians, which differed depending on the platform. Relays that have been destroyed show up in navigation as an unusable node. The following are the list of relays currently available in each version (with destroyed relays denoted by a minus), their amenities and Mastery Rank required to visit:

Note that each instance of a relay can be occupied up to 50 players. When the status of an instance is busy, another instance will appear in case of players have fully occupied said instance to allow more other players to occupy it.

The Hangar and Main Entrance[]

The Hangar is the area players will spawn into. It features multiple Landing Craft docking bays and a constant stream of traffic in the background. The Main Entrance connects the Hangar to the rest of the Hub with a security station with two layers of force field installed. Returning to their docked ship will allow the player to leave from there via the interaction prompt — This option becomes unavailable after leaving the relay on a mission, as the Landing Craft will not respawn in the hangar. Alternatively, pressing Esc  (PC) to open up the menu, then select "Leave Relay" to return to the Orbiter. Additionally, selecting missions in the Relay, located in the Mission Control room. 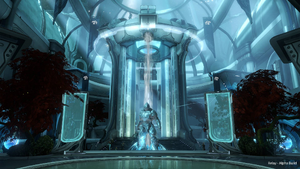 The Concourse is the main area of the Hub, linking the Hangar to the East, North and West wings. It features a giant

Rhino sculpture, similar to one found in the Temple of Honor in Dojos, as well as numerous civilians/Syndicates members interacting with each other. Certain relays will have less or even no civilians/Syndicate members standing around.

This is an interactable console that can only be accessed by players of Mastery Rank 30 or higher to bestow a 3 hour blessing of 25% increase in either affinity, credits, resource drop chance, damage, health, or shields to all players in the Relay (including self). See True Master's Font for more details.

The Void Trader is an NPC known as Baro Ki'Teer, will visit a random relay (excluding Maroo's Bazaar) every 2 weeks for 2 days at a time to sell various unique items in exchange for

Orokin Ducats and Credits. Players can earn Ducats by selling Prime parts at either Void Trader kiosks in the Concourse. Countdown timers on the kiosks are available to inform players of when the Void Trader will next appear in the Concourse, or can be queried in Region or Q&A Chat tabs by typing when baro.

The West Wing (not in Maroo's Bazaar) includes entrances to the New Loka, Perrin Sequence and Red Veil enclaves, as well as a small observation area at the south end. The south end of the wing contains a glass window view of space and kneeling pads similar to those in the clan dojos. Glitches have been known of people being able to be outside of the windows, and can run around freely. This is the same for the other east end.

The New Loka Enclave is full of flourishing plants that have seemingly broken through the floor and the walls of the room, and a small pond where various members of New Loka are kneeling while their Leader, Amaryn, is simulating floating on the opposite end of the pond, by standing on a root. There is also a giant model of Earth hanging from the ceiling, as well as some Orokin devices, such as lamp posts and the projector on the ceiling. In the New Loka Enclave, players can hear water rushing and harmonious humming from the New Loka members.

The Perrin Sequence Enclave follows the strict and cubic Corpus aesthetic, which is occasionally interrupted by the presence of coffee mugs and Tenno-styled banners. Perrin Sequence members are seen working on digital pads, or standing guard. One member on the left-hand side of the entrance is working with a MOA, possibly configuring it, while it bounces excitedly in place. The leader, Ergo Glast, is seen in the middle of the room, next to a large, circular monitor with several Perrin Sequence logos circling it.

The Red Veil Enclave is extremely ominous, featuring a burning tree in the center of the room that the player needs to walk underneath to get the Red Veil's representative at the far end of the room. It also features a live Grineer soldier strapped to a torture table in front of a container full of Infested. The Grineer soldier occasionally struggles at his bonds before receiving an electric shock, while a Red Veil operative stands over him ominously wielding a pair of

The North Wing (not in Maroo's Bazaar) can be entered via the West or East wings or directly from the Concourse. It has entrances to the conclave and Mission Control Room on the first floor. There are also elevators that give access to Darvo's Market and the Sanctuary on the second floor.

Mission Control is a large room with a view of space, where players can access functional Navigation Consoles identical to those found in the Liset in order to access missions. Players can also change equipment load-outs using the various consoles in the room; it's not possible to customize load-outs though.

Accessing the navigation Star Chart on a relay shows other relays in the system as locked. To travel to these a Tenno must leave the relay and access the Star Chart through the navigation function of their Orbiter.

The Conclave is a tall and long room that consists of a mountain-side stairway that leads to the top where Teshin, the Conclave Master, awaits. Along the stairway, bits of mist is visible while lamps are lit and holograms of Teshin perform short yet special Nartas.

Found on the second level of the North Wing accessible by elevator, (the elevator is a blue cylindrical translucent column of light, enter and use to get to the 2nd floor. This where Darvo conducts business with players on the Relay, selling various items and equipment. He offers certain deals for weapons at discounted platinum prices up to 90% at limited stock. He currently only offers one deal at a time and Tenno can only purchase the discounted item once per player.

Completing A Man of Few Words unlocks a weekly mission from Darvo. Players are tasked to complete a 10-minute Survival mission with Clem's assistance. 5 minutes into the mission players will be attacked either by Vem Tabook, the Lynx or the Juggernaut, depending on the faction that the players fight against. Finishing the mission will reward the player a Clem Clone blueprint.

Found on the second floor of the North Wing, accessible by elevator. Cephalon Simaris' sanctuary is home to Synthesis where players can scan enemies in the Star Chart via Synthesis Scanner to gain exclusive wares. It is also home to the Simulacrum, Mastery Rank practice tests, Sanctuary Onslaught, and The New Strange quest.

The East Wing (not in Maroo's Bazaar) includes another small observation area at south end and entrances to the Steel Meridian, Cephalon Suda and Arbiters of Hexis enclaves.

The Steel Meridian Enclave is a scrappy-looking Grineer-styled room with a huge rotary cannon hanging from the ceiling. As a handful of operatives and Ex-Grineer soldiers work on machinery, various resource caches can be seen throughout the room. In one part of the room, a Grineer goes between watering a plant and working on a control console. Cressa Tal, the Steel Meridian commander, can be seen at the corner panel, whereas Clem, when not in Darvo's room, can be seen sitting.

The Cephalon Suda Enclave at first looks like a simple and bare room with a simplified hologram of Suda at the center. As the player approaches Suda, Suda disappears and the room will suddenly disintegrate partially into the Void, with a more accurate manifestation of Suda floating at the end of the outstretch.

The Arbiters of Hexis Enclave looks like a courtroom, with five Arbiters presiding at the center of the room. Behind are Arbiters who stand next to a large drum on each side of the five. Present on the walls at the side are balconies full of Arbiters, sitting in a formal manner.

Located at the north of the second floor of some Relays (see table above), the Dry Dock is a massive hub for players to reconfigure their Railjacks. The Dry Dock is only available in Kronia, Saturn; Leonov, Europa; Kuiper, Eris; and Orcus, Pluto (PC, console relays may vary).

One of the Relays on each platform (Strata Relay on Earth for PC, XB1 and Nintendo Switch and Larunda Relay on Mercury for PS4) was originally a standard Relay that was one of several destroyed by Councilor Vay Hek's Fomorian fleet during Operation: Eyes of Blight. It would later be rebuilt during The Pyrus Project by Steel Meridian with the help of the Tenno.

As the first of the rebuilt Relays, the Rebuilt Relay features a different interior appearance from the standard relays, with the following differences:

In addition to the Rebuilt Relay, another relay not destroyed during Operation: Eyes of Blight (Larunda Relay for PC and Switch, Vesper Relay on Venus for XB1, Kronia on Saturn for PS4) has been updated to the new layout, featuring the same map and room arrangement, with only aesthetic differences.

This Relay features only some of the amenities of all other Relays (such as True Master's Font), however it also offers players the unique facility to trade with each other, and pick up a weekly Weekly Ayatan Treasures Hunt Alert from Maroo. 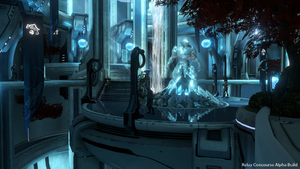 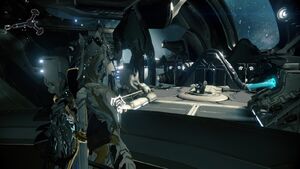 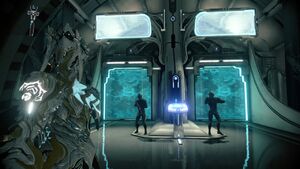 The Main Entrance to the Hub. Two Armed Guards are visible. 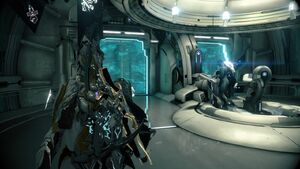 The Main Entrance as viewed from the inside of the Hub. 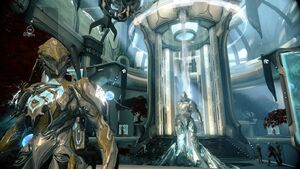 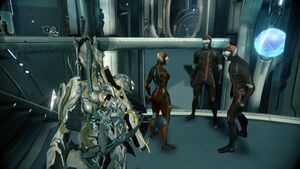 Several civilians interacting with each other. 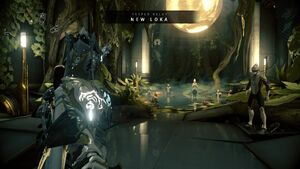 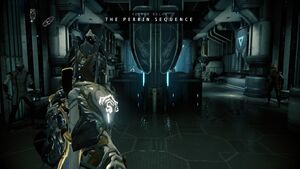 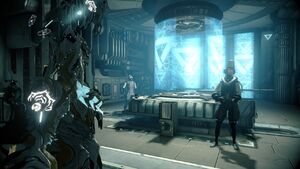 Deeper into The Perrin Sequence Enclave. 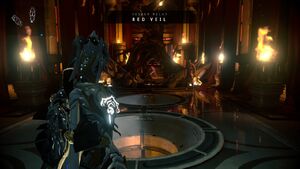 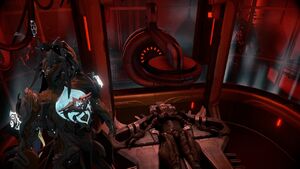 The Grineer Soldier in the Red Veil Enclave, with Infested nearby. 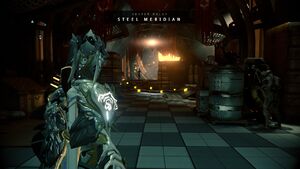 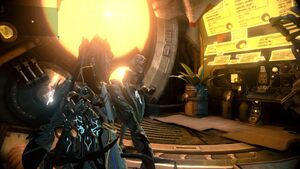 Deeper into the Steel Meridian Enclave. 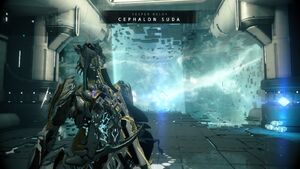 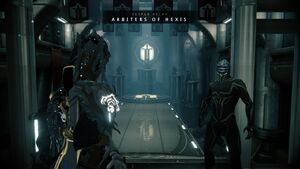 The Arbiters of Hexis Enclave. 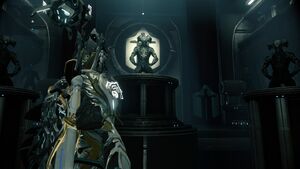 A closer look at the Arbiters. 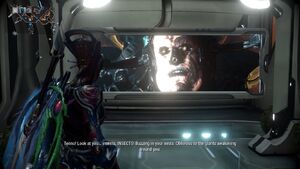 Vay Hek as sometimes shown on the Relay's monitors. 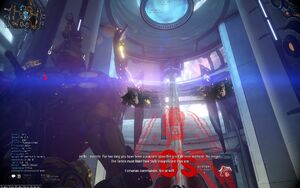 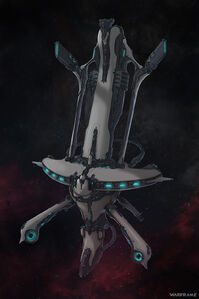 Concept art for the Relay 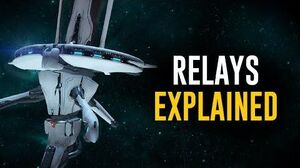 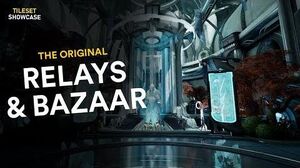 If you don’t have access to a Clan Dry Dock, fear not! Publicly available Dry Docks can be found in the Second and Third tier Relays (Saturn - Kronia and Pluto - Orcus relays on PC) on each Platform.