WARFRAME Wiki
Register
Don't have an account?
Sign In
Advertisement
in: Enemies, Proto Shield Enemies, Enemies With No Drops,
and 8 more
English

People of the Origin System,

With the blessing of your credits and the power of the Void’s sacred energy, I have built a creature stronger than any other. Yes, my children, the Void has made my new Razorback prototype impervious to evil and I will prove it. I am calling on all Tenno, heathen Corpus and Grineer to come to my lab and try to defeat my Razorback.

And when you fail, the whole System will see the Void works its power through me. And then they will know that the only path to salvation is to Give Unto The Void.

The Void be the word, and the word be Profit.
—Inbox message from Nef Anyo during Divine Will Tactical Alert

The Razorback is a Corpus boss introduced in the Divine Will Tactical Alert in Hotfix 18.4.10 (2016-02-11). A creation of Nef Anyo, the Razorback is essentially a much larger Jackal and is boastfully claimed to be "impervious to evil", but possesses a vulnerability to Nef Anyo's previous creations: the Bursas.

The Razorback is fought during a limited-time event, called Razorback Armada, once the construction status in the Invasion menu is completed by supporting the Corpus, appearing as a node next to any active Relay. Completing the Razorback Armada mission three times per event awards 200,000 Credits 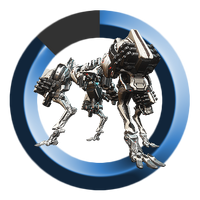 The Cipher Blueprint is reusable, and requires:

Cryptographic ALU is exclusive to Archwing and Railjack missions over Jupiter and Neptune, and can only be found during the course of the Razorback Armada event.

The Razorback bears a striking resemblance to the Jackal, but stands roughly twice its size and has a white sheen and bulky leggings.

Along the four corners of the upper balconies of the arena guarded by a Laser Barrier spawn Corpus soldiers, who will drop down into the arena to support the Razorback.

After activating the terminal to "Warning Test", the platform in the middle will rise to unveil the Razorback.

The Razorback behaves much like the Jackal, with key differences: it is initially immune to all damage the players can throw at it. To damage the Razorback, players must hack into the two terminals located on the sides of the upper balconies of the arena, which will spawn a Bursa, which are hostile to the Tenno. The Bursa must then be damaged and then hacked to turn them against the Razorback, which will cripple its legs and cause it to collapse, allowing Tenno to do damage until it rises back up.

Hacked Bursas will die 10 seconds after they were hacked. Tenno must continuously hack the terminals and Bursas until the Razorback is down for good.

Upon completion of the Razorback mission, all members of the squad will receive one of the following: 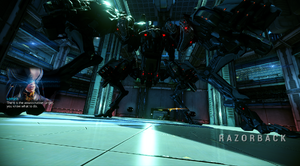 Razorback during its cinematic 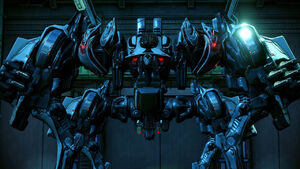 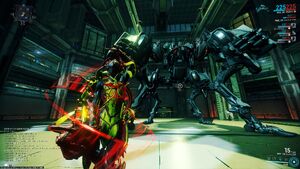 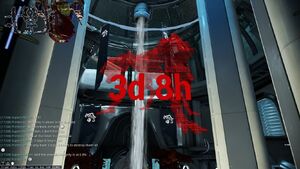 A Razorback Armada countdown timer to attack the Relay.

Hotfix 25.8.1 (2019-10-09)
Hyena Change (Razorback mission only):
An Orokin Cell farming exploit was brought to our attention by not only players, but also our internal flagging system when such a method is tripped for misuse. In short, players were forcing the Hyena’s to spawn infinitely by entering/exiting rooms knowing that their Orokin Cell drop rate is 100%. As a result of this misuse, the Orokin Cell drop rate for the Hyena’s in the Razorback mission will diminish the more you spawn, to still allow for multiple drop attempts but without giving away the entire cake. Please note that players who are trade banned due to triggering this exploit will be manually unbanned after this Hotfix.