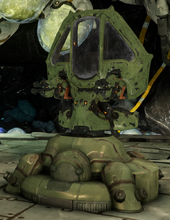 Ramparts are emplaced defensive turrets found on Grineer missions, armed with twin heavy machine guns to engage enemies. Unlike other types of environmental defenses, Ramparts can be directly controlled by Tenno players by mounting inside them with the Use key (default X ), allowing them to use the Rampart's guns. While Ramparts are rooted to their positions, they can be aimed at nearly every direction.

Ramparts have a preset spawn upon the game constructing the mission tileset, and there can be none to few in an entire mission. They have a limited amount of Object health and is subject to health scaling, it can be damaged by Tenno and enemies alike. Once destroyed, they are no longer usable.

The turret will block most projectile damage to the player from the immediate front, at the expense of destroying the turret's own health pool, which does not regenerate and cannot be restored. It cannot however block any melee damage.