The Rakta Dark Dagger is the Syndicate variant of the

Dark Dagger, available from the Red Veil. While wielded, enemies have more difficulty in spotting the user, and damaging an enemy afflicted by 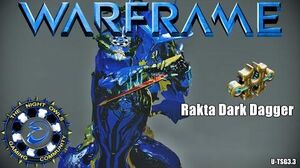 Retrieved from "https://warframe.fandom.com/wiki/Rakta_Dark_Dagger?oldid=2177841"
Community content is available under CC-BY-SA unless otherwise noted.