Railgun MOAs are a larger variant of the standard MOAs, they are colored blue and are rarer. They fire at a much slower rate, but their attacks cause significantly more damage and as of Update 8.3 knock players to the ground upon being hit by the shot. They must charge their weapon before firing and are vulnerable during this time. Their shots have little travel time, and can pierce walls and objects, including

Constitution (faster knockdown recovery) or both can reduce the knockdown time and/or damage dealt while knocked down to minimize risk to players with low shields/armor/health. 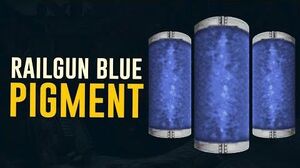 Update 8.3
Retrieved from "https://warframe.fandom.com/wiki/Railgun_MOA?oldid=1998718"
Community content is available under CC-BY-SA unless otherwise noted.