Quests are a set of interlinked missions that occasionally provide lore for WARFRAME's setting, as well as giving various rewards such as Warframes and Weapons upon completion. Some quests such as Vor's Prize are mandatory as players will automatically be redirected by the quest, while some are optional (like Hidden Messages and Howl of the Kubrow). Several Junctions require quests to be completed in order for the junction to be unlocked. Additionally, a number of junctions award quests on completion.

To activate a quest after it has been unlocked, simply walk to the Codex station in the Orbiter, select the Quests tab, select the desired Quest and click "Begin Quest". However, not all quests are activated this way, with some quests having hidden activation requirements and these do not even appear in the Codex until their completion. The player can only take one quest at a time, although they can change the active quest.

Mask of the Revenant 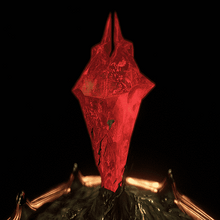 Most quests can be replayed to reexperience or Codex Scanner quest-exclusive enemies and Somachord Fragments. To replay a quest, one simply goes to the completed quest's codex entry and selects "replay quest". When replaying a quest, transmissions, cutscenes, missions, and most related inbox messages will reappear normally, but the primary rewards are not given again.

ANGELS OF THE ZARIMAN QUEST

The Zariman Ten Zero cries out into the endless darkness that surrounds it. In a post-New War world, something lingers in the Void-ridden ship once inhabited by the Tenno. Its wailing can be heard from afar. Return to it, find the source of its song, and unearth the memories echoing throughout the vacant corridors.

Quest Prerequisite: You must have The New War quest completed in order to unlock the Angels of the Zariman quest in your Codex.

If you have not completed The New War, check out our helpful guide: https://www.warframe.com/news/preparing-for-angels-of-the-zariman-en

Similar to the Saya’s Vigil, Vox Solaris, and Heart of Deimos quests, this is a solo gameplay-focused experience that will introduce you to key characters and Zariman related content.

Completing the quest will reward you with gifts from the Void in your Inbox!

Once you have completed the Angels of the Zariman quest, the following gameplay options will become available for you to start venturing deeper into the ship:

We are seasons, all of us.

At once the same, yet... ever changed.

Prepare yourself, Tenno. The New War is here and no one is safe. Old enemies have returned to the Origin System… will the factions unite against Ballas, Erra, and the advancing Sentients, or will they buckle under the weight of a full-scale invasion?

Players can prepare for The New War quest in the following ways:

The New War will take several hours to complete and will prevent normal Warframe activities from taking place for the duration of the quest. Plan accordingly!

Access to your loadouts will be limited. We encourage you to not only prep your Warframe, Necramech, Operator and Railjack Loadouts but also your Fashion Frame. And as always: CRANK THAT AUDIO!!

You may notice your Operator sounds a bit different while playing The New War Quest. We hope you enjoy the updated Operator voices. Pre and Post-New War Operator voices will be the familiar ones you’re accustomed to.

Additionally, a new Accessibility setting has been added titled 'Hold Button for Struggle Action'. This allows you to choose either 'Hold' or 'Tap' when confronted with a struggle context action, where typically mashing of a button would be requested. We recommend that you put this setting to your preference before initiating The New War Quest to ensure you have the best experience. Players can turn this on in the Controls options menu at any time in the quest, just above the Archwing section.

A significant amount of effort has gone into leveraging new graphics technologies for the levels seen in The New War. For PC players we recommend that you set your Graphics Mode to Enhanced for the full experience, if your computer can handle it! (Display tab under Options). The Playstation 5 and XBOX Series X already use this setting.

***You cannot Replay The New War Quest once it has been completed in this Update. It is a potential 2022 addition. Take your time and we hope you enjoy it!

Added a new UI notification when inside the Orbiter that is a persistent reminder for Quests, to help guide new Tenno to their next steps. A lot of new players have felt lost once they finish Vor’s Prize, and this persistent reminder will show them what to do next! This can be disabled at any time in the menus under Options > Interface > Show Tenno Guide!

Deimos emerges in Martian orbit, completely overrun by the Infestation... yet among the writhing mass, a distress call comes over a most ancient carrier wave.

A new Quest is available in your Codex, Tenno! The Prerequisite for ‘Heart of Deimos’ is completing the Earth to Mars Junction.

The “Heart of Deimos” Quest will introduce you to the newest Open World. Learn all about the denizens of THE CAMBION DRIFT, and the souls lurking in THE NECRALISK HUB!

If you buy Xaku with Platinum, you will receive a Riven Mod as a quest Reward in addition to the Xaku Blueprint.

Tenno beginning their journey in Warframe will now awake to a new cinematic introduction and revised Tutorial.

Warframe’s new Tutorial continues the story introduced in the cinematic directed by Dan Trachtenberg. Elements that have become central to Warframe’s core gameplay, like bullet jumping, are now part of the tutorial. Traverse the Plains of Eidolon to escape Captain Vor and begin your quest to uncover forgotten memories!

*Tenno who have already played through the Tutorial can play through the refreshed version by visiting the Codex Quest section under a new name ‘Awakening’ (also replayable)!

We are Desire. Ours is the grasping golden hand. We. Are. Corpus.

Nef Anyo claims to have found an heir to the long-deceased Corpus Founder, Parvos Granum, and has the means to prove it. The Solaris have begun disappearing in droves and Eudico thinks it has something to do with Nef’s power play. Whoever they are, the heir to the Founder would be able to solve the stalemate and stage a total takeover of the Corpus Board. If Nef Anyo has anything to do with it, that spells bad news for the Solaris.

The Deadlock Protocol sheds new light on the industrious origins of the Corpus, introduces the time-bending Warframe, Protea and includes a remastered Corpus fleet full of innovative threats and escalating security measures.

*Players who purchase the Protea Warframe before playing the Quest will receive a Riven as an additional reward.