Player vs. Player, colloquially shortened to PvP, refers to the collection of game types where player-controlled Tenno face off against each other in battle. 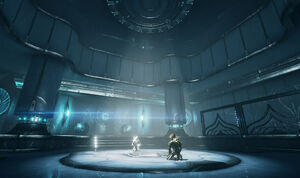 Dueling is a game mode added in Update 8 with the introduction of the Clan Dojo. By building a Dueling Room in the Clan Dojo, two players in that Dojo can begin a duel session. During the match, most of the effects and damage dealt by Warframe powers and Weapons remain the same as in missions. 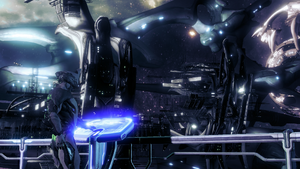 Solar Rail Conflicts is a game mode added in Update 14 which take place on Dark Sector nodes that are contested by another Clan or Alliance. This game mode allows a total of eight players to compete in an asymmetrical attack/defense gamemode, where four players (supporting the Challenger) attempt to infiltrate and damage the Solar Rail while the other four (supporting the Occupant) defend it. Solar Rail Conflicts are currently disabled under the "Dark Sector Armistice" and will not return in their original form. 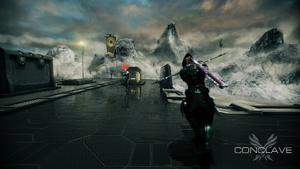 Conclave is a Syndicate added in Update 16.0 that provides large scale PvP missions. First introduced as a game mode in Update 10.0. It was restricted to players with similar Conclave Levels instead of their clan affiliations, and features battles on designated arena tiles. The new Conclave introduced in Update 16 creates a new Arsenal for players with a limited number of Warframes and Weapons in order to allow fair play. Available game modes include Annihilation, Team Annihilation, Cephalon Capture and Lunaro. Playing Conclave allows Tenno to earn Standing from Teshin, and unlock unique rewards as a result.

Conclave and Solar Rail Conflicts currently only allow certain Warframes and weapons to ensure balance is fair and even. Conclave-exclusive mods can be obtained from Teshin with Standing, from drops by Conculysts and Battalysts, and from completing a Conclave match. Unique variants, such as Prime and MK-1, are generally permitted.

Restrictions on Mod choice is also applied. The Conclave Syndicate also sells a variety of PvP exclusive Mods for players with sufficient Standings. Mods can also be obtained from defeating Conculysts and Battalysts, as well as being rewards from Conclave matches.