Pursuit is a Mission type exclusive to Archwing that has players pursue the enemy's ship to disable it and retrieve its Black box.

When the mission begins, a Grineer Courier will appear and players must give chase. First, Tenno must disable the engine room, focusing their fire on the Courier's aft-mounted central exhaust to disable it for a short time. Note the engines' exhaust trail reveals that there are two engines (upper and lower) and where they are located, but the central weakpoint is more consistent to hit.

Once immobilized, the Courier will defend itself by deploying small heat-seeking mines, firing back with mounted turrets (either machine-guns or rocket launchers), and by summoning Dregs, Lancer Dregs, Dargyns, and Shield Dargyns as back-up.

To capture the Courier ship, there are four small orange shield generators located in eight possible positions on the ship that must be destroyed in order to take control of the ship. However, the Courier moves at a very fast pace and can make sharp turns to avoid gunfire, as well as dropping large mines to scatter pursuers, making it difficult to damage the generators. Additionally, shield generator positions may vary and some of them are simply out of the line of fire while pursuing.

The Courier's engines can be shot, which will dramatically slow down the ship after it takes enough damage and give an opening to eliminate the shield generators. However, the engines will eventually auto-repair and resume moving at full speeds; if this happens three times, the Courier will escape and the mission will fail.

Once all the Courier's shield generators are destroyed, players can focus fire on the ship itself, disabling it completely. Players must then defend the Courier ship for 60 seconds until the Lotus has retrieved the ship's black box. The Courier's turrets will become allied and fire at enemy ships for the rest of the mission once this mission phase has begun.

In addition to the mission reward, destroying components on the Courier will grant some affinity to the killer based on enemy level. 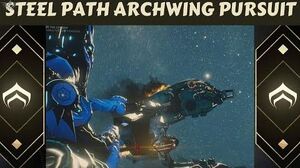