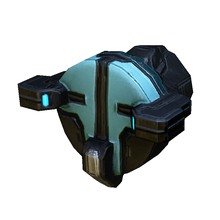 Throw out explosives to be triggered by passing foes.

The Propa Scaffold is a scaffold used in Amp construction, that allows the weapon to perform an alternate secondary fire function (default Mouse3 ). The Propa fires a ball that travels up to 2 meters, which then explodes on contact with any surface or enemy or automatically after 1.5 seconds of flight.

‍3,000 standing and requires a rank of Instrument to purchase. It is also a possible rank-up reward for advancing to ​Instrument​ with Vox Solaris.

Retrieved from "https://warframe.fandom.com/wiki/Propa_Scaffold?oldid=2152222"
Community content is available under CC-BY-SA unless otherwise noted.