Prolonged Paralysis is a Warframe Augment Mod for

Paralysis's stun duration, as well as slowly pulling affected enemies towards her. 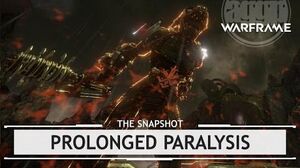