CODEX
Orokin elites admired farmers in conquered regions, because they had learned to fight with modified farming tools despite being forbidden to own weapons. For their voyage, the Zariman were presented with Praedos in recognition of Zariman tenacity. The Void reinforces the strength of the spirited individual by fortifying the Praedos.

Praedos is an Incarnon ceremonial tonfa. Accumulating 5x Melee Combo and then executing a Heavy Attack transforms the weapon to increase its range and attack speed.

Praedos' main blueprint is purchased from Cavalero of The Holdfasts at Rank 4 - Seraph for 9,000 Standing

9,000 Standing. The blueprint can be traded. 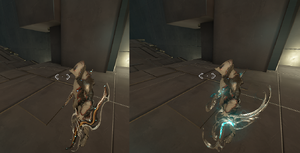