Not to be confused with

Polarization is the process in which a Polarity is added to or modified on a mod slot to a Weapon, Companion, or Warframe, allowing an individual equipment to use more mods and effectively increase their power beyond their original capacity. A Forma is required to polarize an item. 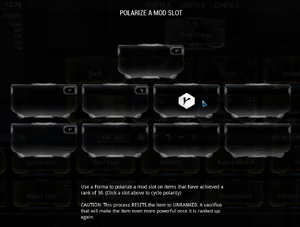 Polarization becomes available to equipment only when it has reached Rank 30. The option is displayed and applied in a similar fashion to the Orokin Reactors or Orokin Catalysts, by means of Forma.

When we first introduced Forma years ago, Warframe was a much smaller game. We had fewer weapons, fewer Warframes, and way fewer Mods. As players continue their Forma journey, there’s often discussions on doing a Quality of Life (QOL) pass to the way things work with our favourite Golden Puzzle Piece.

We want your Mastery Rank to be considered when using Forma to establish a baseline power level for your playable characters!

What does that mean?

If a Mastery Rank 30 player uses a Forma, they won’t have to re-unlock any Abilities (or their Ranks) on a given item! Yes, they’ll still need to level the gear itself to apply another Forma but, depending on your Mastery Rank, you can have access to more (or all) Abilities on your unranked gear! This achieves our goal of keeping Forma essential to build customization, but allowing players with higher Mastery Ranks a more convenient experience.

Right now, using a Forma on a Warframe (or Archwing/Necramech) requires you to start from 0 when it comes to Abilities you can use. Furthermore, you only get the first Rank of your First ability. Take Valkyr for instance. You install a Forma, and you’re back to only casting unranked Rip Line!

Our change will make it so your Mastery Rank impacts how much you have unlocked by default on Forma use. Following our Valkyr example, with this change, a Mastery Rank 10 player would have all of her abilities unlocked upon applying a Forma to her, albeit not at their full strength!

This ranking process is something players already experience in game - you know by the time you’ve levelled your Valkyr on Hydron to 10, you unlock Hysteria. We are making your Mastery Rank ‘match’ those milestones, so to speak, with the end goal being a Mastery Rank 30 player can use Forma without ever having to be locked out of Abilities. Simply put, the higher your Mastery Rank, the higher the baseline of your gear when using Forma.

Sorties and Arbitrations now allow Mastery Rank 30+ players that have put at least 1 Forma into their Warframe to bypass the "Rank 30 Warframe" requirement.