It can be used to make purchases from the Market, rush crafting in the Foundry and to rename player's character, Clan, and Companions. It can also be used to pay other fellow players when trading with them for Prime parts, Mods and other tradeable items.

Additionally, for short periods of time, players can upgrade their account with Prime Access packages. Not only this supports the developers, but also rewards the player with hefty platinum bonuses at a much discounted price as opposed to buying platinum for cash from the market.

The game uses an optional payment system: a majority of weaponry and warframes can be earned in game (everything other than Founder-exclusive items and event, retired, or prime items). However, with Platinum, the grind to obtain weapon and warframe blueprints and their resources is circumvented by buying non-prime versions from the Market, and Prime versions from other players. A player can purchase a small selection of Weapons from the Market for

Credits, although most weapons and Warframes are only offered via the schematic to be purchased, which can be used for crafting in the Foundry.

There are a few items that can only be obtained exclusively through Platinum: Color Palettes, various cosmetic items (including renaming), and to a large extent slots (a small and limited number of slots may be earned via Nightwave). Slots allow a player to keep multiple different weapons and warframes in order to create different loadouts. If a player has filled all of their weapon/warframe slots and would like to acquire another weapon/warframe - they will have to buy a new slot or sell one of their weapons/warframes for credits to free up a slot. 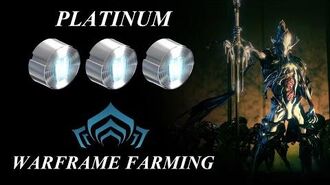 Warframe Farming - How to Get Platinum