CODEX
The steel flag of Old War Railjack crews, the Pennant was invaluable in repelling boarders. With each heavy attack kill the Pennant's speed of attack increases.

The Pennant is a Two-Handed Nikana used by Railjack crews during the Old War, featuring high critical chance and critical multiplier. The Pennant gains increased attack speed after killing an enemy with a Heavy Attack.

The Pennant's main blueprint can be obtained from defeating Blite Captain, Glacik Commander, Lektro Commander, or Pyr Captain in Empyrean missions (at Kasio's Rest on Saturn Proxima, Flexa in Veil Proxima, or sometimes Korms Belt in Earth Proxima). The blueprint pickup is shared across the entire squad and can be traded between players. 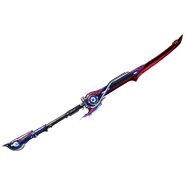 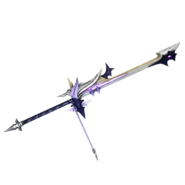