Coinciding with the events in Operation: Mutalist Incursions, Alad V, now turned Mutalist, continues to thrive and populate his Mutalist creations throughout the Origin System. The Tenno attempts to triangulate Alad's location by sabotaging Infested ships. Eventually, they reach Alad's lab and destroy it, after which he unveils his newest creation: a

Mesa Warframe controlled by the Infestation. Putting Mesa out of her misery, the Tenno obtains information on Alad's true location. They eventually assassinate Mutalist Alad V on an Infested Corpus ship, drifting in orbit around Eris.

Remarkably, Alad V survived, but the Tenno crippled his ability to deal further damage with his experiments on the Infestation.

Please note that some of the narrative is no longer up to date.

In order for the player to start this quest, you must complete the Eris junction on Pluto. Upon completion, the player will be awarded with the Patient Zero Quest.

Go to the Quest section of the Codex, select the quest, then click "Begin Quest" to start.

Alad V's infested ships are slamming into populated centers all around the system. He's using these ships like spore pods to spread his Mutalist plague. Everyone is affected. Equally concerning are the new strains of Infested he's using in this attack.

There are two courses of action. First, we must extinguish each Infestation at its source. I will be issuing Bounties, so that we can cut down as many of these new Infested as possible. Pay attention to your Navigation Console for updates.

Secondly, we need you to deal with the source of the problem. I have sent you the details of a mission to locate Alad V and destroy his lab.

Left unchecked this plague will spread out of control. You must start immediately, there is no time to waste.
—The Lotus

Upon starting the quest, the players will receive an inbox message from Alad V himself, heavily infected by the Infestation, announcing the now-evolved Infested species (which he calls its empire). The transmission reads as follows:

Hello, inhabitants of the Origin System!

It is my singular pleasure to announce that today is the first day of a new empire. An empire populated not by Corpus, not by Grineer, and certainly not by Tenno. No, the Mutalist Empire will be populated by you. A glorious new you, baptized by Mutalist Flesh.

You call this a disease, an infestation? I call it Unity, one army under me. Welcome to your new species.
—Alad V

Upon hearing the news, the Lotus immediately sends the Tenno to a Corpus Ship on Naeglar, Eris to extract data that would reveal what the Corpus know about Alad V, playing out as a Spy mission. The Corpus had been searching for Alad V for months due to his devastating attacks on their ships. Once the second datamass has been collected, Alad V contacts the player about appreciating his "gift" to them, signaling the arrival of Infested units on board the ship that will fight both Tenno and Corpus alike. The mission ends once all the Data-masses have been brought to extraction.

The data collected from the Corpus reveals that Alad V has gotten hold of another Warframe, with plans to infect it.

In order to triangulate Alad V's location, the Lotus sends the Tenno to sabotage three Infested Ships, with the first ship being located on Brugia, Eris. Once again Alad V contacts the player during the mission, telling them of his plans for evolution and further spreading the Infestation. Lotus comments that the Infestation is changing Alad V's mind, making him think like an Infested.

The Hive Sabotage mission takes place on Saxis, Eris. Here, Alad V expresses his admiration for his Mutalists, and details his plans on making a Mutalist Warframe. At the end of the mission, a nervous Ordis asks whether it is possible for a Warframe to be infested.

The third and final Hive Sabotage mission is set on Kala-azar, Eris. Alad V now expresses his complete disregard of Corpus philosophy by denouncing the ideals of profit. At the conclusion of the mission, the Lotus finally finishes tracking down the location of Alad V's laboratory.

At this point, Lotus, referring to how Alad V seems to have changed, remarks that the Infestation has gotten to his mind and that he is not using the Infested as a weapon, he is Infested.

With the laboratory's location uncovered, the Lotus sends in the Tenno to Xini, Eris, to destroy the lab, ensuring that Alad V cannot create any more Mutalist Infested even if he has already escaped from the area. Players are tasked with a Sabotage mission aboard a Corpus Ship to destroy its reactor core.

After the reactor core is destroyed, Alad V will send in an Infested Mesa against the player to show off his work. The Lotus immediately insists that the Mesa, was in fact "not a Tenno. That's a hollow Warframe being puppeted by Infested flesh. Put it out of its misery." The Infested Mesa uses her Regulator Pistols and a

Plasma Sword as her weapons, and can parry player attacks. Players must kill the Infested Mesa before they can continue to extraction.

By destroying Alad V's ship you have destroyed his ability to make new Infested. Now you need to go after the man himself. He's on the run and it's up to you to track him down. Use the attached tracker to find him. 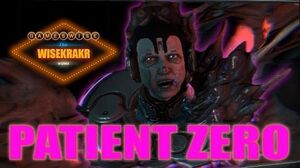 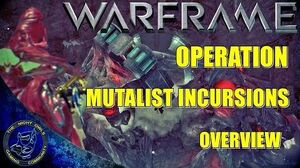