The Parazon is a bladed tool used by Warframes for a variety of functions. It is primarily used for Hacking enemy electronics but is also strong enough to be wielded as an assassination weapon. The weapon is normally hidden when not in use and can be materialized on the Warframe's right wrist when needed. It also comes with a tether that allows the Warframe to throw the Parazon out and then retrieve it afterward.

The Parazon appears as a weapon in the Arsenal that is permanently equipped on all Warframes. It possesses three Parazon Mod slots, which can be used to enhance its abilities. As with all Warframe weapons, the Parazon can also be color customized as the player desires.

When hacking a console, the Warframe inserts the Parazon into the console to initiate the hack. Hacking bonuses are applied according to the equipped Parazon hacking Mods.

Aside from hacking, the Parazon can also be used to perform a lethal Finisher called Mercy, which has more elaborate kill animations compared to normal finishers. Mercy kills can be performed on any enemy with a red Parazon symbol above them accompanied by a unique sound cue, which has a chance to occur when the enemy drops below 5% of its remaining health.

Impact procs increases the chance of enabling a Mercy by 10% per stack. Successful Mercy kills can grant combat bonuses to the player depending on the Parazon mods they have equipped. The window for executing using Mercy expires in 10 seconds; the Parazon symbol blinks with three seconds left.

Normal Stealth kills cannot be performed by the Parazon, regardless if the player has a Melee weapon equipped or not.

It can also be used to instantly kill Gokstad Crewship pilots and hijack their ships, regardless of the pilots health.

Vanquishing or converting a Kuva Lich requires a Parazon with Requiem Mods equipped. These mods are acquired from Requiem Void Fissure missions, and do not provide any combat bonuses inherently but are instead an essential aspect in defeating Kuva Liches in combat to sever their Continuity.

The Parazon has three Requiem mod slots in addition to its normal slots, which are unlocked upon the player acquiring their first Requiem Mod. 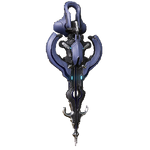 Retrieved from "https://warframe.fandom.com/wiki/Parazon?oldid=2072472"
Community content is available under CC-BY-SA unless otherwise noted.