Every Warframe has at its disposal a special blade... A Parazon... as lethal to technology as it is to flesh.
—Lotus to the Tenno during the Jackal Assassination Mission

The Parazon is a bladed tool used by Warframes for a variety of functions. It is primarily used for Hacking enemy electronics but is also strong enough to be wielded as an assassination weapon. The weapon is normally hidden when not in use and can be materialized on the Warframe's right wrist when needed. It also comes with a tether that allows the Warframe to throw the Parazon out and then retrieve it afterward.

The Parazon appears as a weapon in the Arsenal that is permanently equipped on all Warframes. It possesses three Parazon Mod slots, which can be used to enhance its abilities. As with all Warframe weapons, the Parazon can also be color customized as the player desires.

When hacking a console, the Warframe inserts the Parazon into the console to initiate the hack. Hacking bonuses are applied according to the equipped Parazon hacking Mods.

Aside from hacking, the Parazon can also be used to perform a lethal Finisher called Mercy, which has more elaborate kill animations compared to normal finishers. Mercy finisher prompts are indicated by a red Parazon symbol above the enemy accompanied by a unique sound cue, and are performed by pressing the Interact button (Default X ) in melee range.

During normal gameplay, Mercy finisher prompts will only show up on specific heavy units. These prompts are guaranteed at 40% (60% on Corpus with all their shields removed) of their total health.

These heavy units are:

Successful Mercy kills can grant combat bonuses to the player depending on the Parazon mods they have equipped. The window for executing using Mercy expires in 10 seconds; the Parazon symbol blinks with three seconds left.

Normal Stealth kills cannot be performed by the Parazon, regardless if the player has a Melee weapon equipped or not.

It can also be used to instantly kill Crewship Pilots and hijack their ships, regardless of the pilot's health. It is also used to defeat the Jackal by disrupting its auto-repair after fully depleting one of its health bars, preventing that health bar from regenerating.

Like normal weapon kills, Parazon Mercy kills give half of the enemy's Affinity value to the Warframe. However, the other half is lost, presumably because the Parazon does not accumulate affinity itself.

Against Kuva Larvling, Candidates, Thralls, and Hounds, a Mercy attempt against them is called a Secret Mercy. Against Kuva Liches and Sisters of Parvos, the Mercy is called a Requiem Mercy. These units do not die immediately from their health bar being depleted, instead slumping over to allow a Mercy to finish them off.

Defeating a Lich or Sister with a Requiem Mercy requires a Parazon with a sequence of Requiem Mods equipped. These mods are acquired from Requiem Void Fissure missions, and do not provide any combat bonuses inherently but are instead an essential aspect in defeating Liches/Sisters in combat to sever their Continuity. The Parazon has three Requiem mod slots in addition to its normal slots, which are unlocked upon the player acquiring their first Requiem Mod. 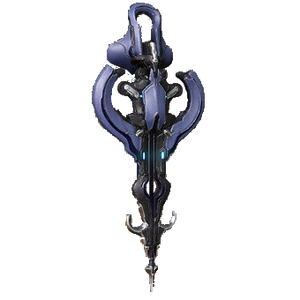 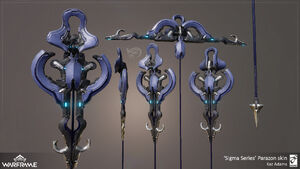 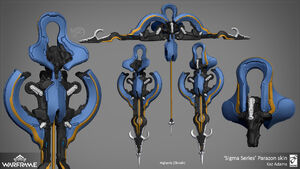 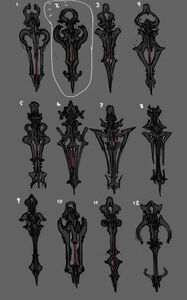 As a part of the Eximus Rework, we have also updated the condition to Mercy Kill certain Eximus that did not have this in the past!

Here is a list of the new Eximus types that can be finished with Mercy Kills:

Parazon attacks were introduced in The Old Blood as a way to Mercy kill enemies. This stylish and universal blade has had a clear role in all things Liches, but their role in the game at large has been hard to play around. There are problems in need of solving, and the below outlines how we’ve done just that!

The problem with Mercy kills is they are hard to pull off, making engagement with the system far too low! Mercy kills only have a chance to trigger when an enemy’s health is 20% HP or less. In practice, you really never know if it’s going to happen. And if it does, it is often too late! You’ve riddled them with Status effects, a Squadmate casts an Ability, or your Kavat might be feeling extra bloodthirsty, and you cannot get in for the Mercy kill.

We are changing their design, adding new Mods (thanks Design Council!), and refreshing the system.

The change is based on a core principle: We want to make them more reliable and more strategic so you can actively decide if you want to use a Mercy kill or not.

Our change is rooted in the following:

A Mercy Kill opportunity is guaranteed when an enemy gets below 40% (60% for Corpus, but requires all Shields being stripped), but only on SPECIFIC units in each faction.

And the logic is rooted in the following common scenario:

Imagine you see a heavy gunner in the distance. You have “Blood for Energy” on your Parazon. You see you need some Energy, so you start shooting the heavy gunner knowing full well once she’s at 40%, she will be open for a Mercy kill and the Energy could be yours!

You can plan and decide!

This also means that Impact Status Effect is changing:

Before: Impact Status Effects used to increase the chance that the random Mercy kill opportunity would happen.

After: Impact Status Effects increases the Mercy Kill threshold range on eligible enemies. So instead of triggering at 40% on the list above, you can apply Impact Status to do a Mercy kill sooner (4% per Status)… up to 80%. Meaning, applying a lot of Impact Status quickly makes an enemy VIP more quickly susceptible to a Mercy Kill. Impact would then be a build strategy for getting the VIPs out of the fight!

But what about really high levels you ask?

We have made changes to this since our original Developer Workshop.

Up until level 150, the Parazon Finisher triggers at 40% Health remaining.

After that, every 5 levels reduces the threshold by 1%, down to a minimum of 10%! Eligible Enemy Health bars will have a notch on them to indicate these thresholds..

This change was made to make it more clear to our players, as well as still approach guaranteed kills at high levels with an amount of balance.

In addition, since Parazons were reworked, Zephyr's Airburst no longer overlaps with finishers.

5 New Parazon Mods are here! Find them all today to add new power and Utility to your Parazon!

These new Parazon mods can be collected by completing Corpus Railjack Spy missions.

Instead of ending in a knockdown or ragdoll, accumulating 5+ Impact Effects will now result in a "big stagger" with smaller staggers leading up to it, which has a random chance to activate a Parazon Finisher if the enemy is under the Health threshold. Each Impact Status adds 10% chance for the Parazon Finisher to be available.

This Parazon model was gifted to the first Warframe Railjack crews.