Oxium is a rare lighter than air alloy of Orokin origin, used in certain Corpus Robotics.

Oxium is an uncommon component. Dropped by the uncommonly encountered Oxium Osprey with a guaranteed drop rate, it can be found in quantities of 7-12 and will only drop if the Osprey is killed before it destroys itself by charging against the player, an ally, or a wall.

Oxium can also be found by destroying Storage Containers, completing low-tier Bounties, and by opening the 3rd Cache in Grineer Sealab Sabotage missions.

Tips collected from common player experience and should be viewed as advice rather than fact.

By purchasing this item you can directly exchange 30 Platinum 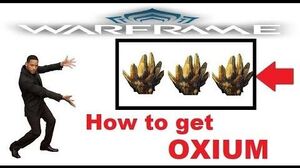