“It's taking longer than I calculated.”
This page is actively being worked on and may not be completely correct. Please assist in making this page accurate.
IPA and symbol images

The Ostron Language is used by the Ostron people, commonly found on the colony Cetus. The written form can be found all over signs and banners found around Cetus, while the spoken language can be heard from the people you will encounter there.

What is interesting to note is that while the written language translates to English, the Ostrons have verbal words that do not translate the same way, each with their own meanings, some of which are denoted below in the #Unique Words section.

Unlike most scripts in the WARFRAME universe, all writing in the Ostron alphabet is only written phonetically in the English language (or at least close to).

The written language may be written vertically or horizontally, similar to most East Asian countries.

List of proper nouns and names of Ostron origin.

There are various Ostron inscriptions written on the Magus Arcanes, Virtuos Arcanes and Exodia Arcanes obtained in Cetus, with the exception of Exodia Contagion and Exodia Epidemic which are obtained from the event Operation: Plague Star.

Unlike the Arcanes obtained in Fortuna from Little Duck or Rude Zuud, which use Solari Language and say what the Arcane is, it appears the Ostron Arcanes are random words or pieces of words strung together which do not correspond to the name of the Arcane. Presumably, these could be the Ostron words for those names.

Note that translations are in the International Phonetic Alphabet. 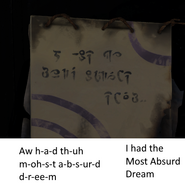 A note found in the Glassmaker investigation