The Orokin Towers, also known as the Orokin Void, is the primary Tileset of the Void in the Star Chart.

The Orokin Towers exist in small pocket dimensions referred to as the Void; these areas are outside the realms of normal space. The Towers themselves appear to be fully functional Orokin structures, likely used as research facilities and secret refuges by the Orokin, and as a result, they are well-protected; the defenses within an Orokin Tower are controlled by a Neural Sentry. The Neural Sentry appears to be able to seize control of invaders to create legions of Corrupted troopers - whilst these forces behave similarly to their regular counterparts, they defend the tower until death. Perhaps more notably, it also seems to be able to modify (and even improve) technological devices, as evidenced by the introduction of the Fusion MOA (and Corrupted MOA, by proxy) during the Fusion Moa Event, along with various other modifications to the Corrupted and their equipment.

One unique feature of the Orokin Void is that prime Warframes will cause the Death Orbs to emit a wave of energy that will grant 250 energy to all frames within 30 meters. This may only happen once per trap.

Ferrite, Rubedo, Argon Crystals and Control Modules can drop from all enemies and containers in the Orokin Void. Corrupted Vor also has a chance of dropping an Orokin Cell or an Argon Crystal.

Aside from deploying Corrupted units, Orokin Towers also employ large amounts of traps that, at first glance, would appear as normal scenery in the room.

Traps are mostly triggered by Pressure Plates hidden in the floor when a player steps over them. However, some Pressure Plates can reveal hidden treasures as well, like containers which have a high chance of dropping Mods, so stepping on them might not always be a bad idea.

There are two types of pressure plates; square 'flush' plates (as shown in the example image) and raised circular plates. The latter type often have a glowing lotus-like design which can appear red, orange, green, or blue. The pattern is usually orange, but certain rooms may use pressure-plate based sequence puzzles to unlock access to the treasure, with failures causing the pattern to turn red and activation of traps or turrets instead.

Pressure Plates cannot be activated by the Corrupted.

One variety of Orokin traps are the Laser Plates, wall-mounted laser emitters that can be either stationary or moving along fixed rails. Once triggered, Laser Discs will fire a sustained laser straight ahead that does massive

Radiation damage, capable of cutting through 1000+ total shields and health in little over a second. The lasers can also inflict the Confusion effect on victims who survive contact. However, the sustained lasers are usually pretty easy to spot, and the Discs can be destroyed with a few shots. Lasers can also harm and kill enemies, who are not intelligent enough to avoid them.

Some Laser Plates cycle on and off once activated and will glow briefly before emitting a beam. Others will emit their beam constantly once activated. Either way, inactive Laser Plates can be destroyed pre-emptively if one wishes to be certain to avoid any mishaps. Note that the Laser Plates mounted on Death Orbs (see below) are invulnerable until the Orb is active, and so cannot be disabled in this fashion.

The beams from Laser Plates can often be avoided using the Slide maneuver, though Sentinels will often hover at the same height as the beam and may be destroyed. Given their (usual) height, the horizontal beams are also fairly easy to jump over in most cases.

Some Laser Plates are instead mounted to the ceiling and point directly downwards, but this variant is usually only found within certain parkour rooms.

"Death Orbs", or "Box Traps", are slightly more sophisticated and dangerous traps, resembling a large orb with a few discs on its surfaces. Once triggered, Death Orbs can come in two varieties.

The Spinning Lasers variety consists of 1 to 4 horizontal laser plates on the orb's sides and a raised disc on top. The number of lasers activated is influenced by the level of the Void mission, T3 having often 3 - 4 active lasers and the specific plates that activate is randomly decided. The Orb will slowly rotate as long as its Rotation Plate is intact, thus firing its lasers in all directions. Unlike Laser Discs, the Spinning Lasers trap's weakness lies in its "joints", which connect the discs to the orb. Destroying the top Rotation Plate will stop the spinning while destroying the Laser Plate will disable each individual laser. A destroyed plate will reveal the internals of the Death Orb, which can be shot to destroy the entire Orb.

The beams emitted by the Laser Plates deal

Radiation damage, can cause the Confusion proc, and can also harm the Corrupted. They can often kill with only a moment or two of contact, so by destroying the rotation plate whilst the lasers are in a favorable position, Tenno can create barriers that can kill or weaken incoming enemies. This can be useful during Survival missions.

The "Thumper" variety features a single Shockwave Plate on top, which will slowly rise and then slam back down, creating a visible knock-down shockwave each time to disrupt the player, similar to a Shockwave MOA. Like the Spinning Lasers trap, it can be destroyed by shooting its joint until the top cap blows off.

Thumpers have no effect on the Corrupted.

When using a Prime Warframe, moving close to a Death Orb will cause it to release a wave of energy that restores 250 Energy to all nearby Warframes within a small radius, regardless of whether that Death Orb is activated or not. This effect can only occur once per orb. However, rooms that normally would have a Death Orb but it is not loaded (such as a collapsible cover spawns in the spot instead) players will still receive energy as if an orb was there. This means that the effect given by death orbs isn't tied to the physical appearance of the orbs at all.

Whilst Orbs take damage whilst inactive (damage numbers will appear from hits), their health bars do not decrease, even by using weapons with Punch-Through, similar to deactivated Corpus Turrets. Also note that the explosion from a destroyed Death Orb will not cause damage to, or knockdown, the Corrupted.

A slightly less lethal trap that consists of floor panels which create an icy mist. Anything directly in contact with these tiles will effectively be subjected to a continuous

Cold Proc until leaving the tile; movement speeds, shield regeneration, and fire rate will be greatly reduced, whilst reloading weapons, reviving teammates, and using abilities will take significantly longer. Bleedout time also significantly increases if a Tenno is downed on such floors (possibly a bug as the timer counts down slower rather than being extended). The duration of any negative Status Effect will be doubled (the drain timer will slow to half-speed) while on this tile; the duration of positive status effects will not be changed.

In many instances, these tiles can be passed via dive kicking or jumping to avoid the slowdown effects. It should also be noted that the Corrupted pathfinding AI often leads them to walk directly over these tiles rather than around them.

There is also a wall-mounted version that is exclusive to the parkour/treasure rooms.

Collapsible covers are strewn around the map in abundance. These structures will rise from the ground when someone gets near, for both Corrupted and Tenno, providing a spot of cover to shoot from. Comes in both square or circular varieties. Note: if you are standing on top of it when it deploys, it will launch you into the air. Similarly, they can also launch loot and ragdolls into the air, which may rarely cause items to disappear.

Certain Orokin Containers, either due to age, volatile contents, or intentional boobytrapping, will violently explode when breached by any means. Fortunately, these containers can be identified by their red lights and the telltale smoke plumes rising off of them. They may be safely shot and destroyed from a distance, as the explosion has a fairly small area of effect.

These containers never drop loot no matter how they are destroyed, much like the Corpus and Grineer Explosive Barrels.

These containers used to be much smaller than the normal variety which also aided in identifying them, but this bug has been fixed in recent patches.

A slightly less lethal trap, Orokin Turrets are randomly placed around the Void, mostly inactive. They can be activated by various means, mainly by Pressure Plates, or when a locker or canister is opened. When active, they fire a burst of lasers, similar to a Fusion MOA's Drone, but far weaker. They possess a small amount of shields and low health, making them easy to destroy.

Many of the containers within the Orokin Towers provide large sums of credits, but they also have a small chance to contain Mods that can quickly despawn. There are many locations that are "off the beaten path" that test the parkour skills of Tenno in small races to hidden treasure rooms. One, in particular, has an entrance with a gold-rimmed button at a dead end, which will open up a timed obstacle course with lasers that have mods in its final room. There is even a slight chance there can be more than one hidden treasure room in one void mission. Typically, the path to such obstacle course rooms can be located by observing corridors and unlocked doorways that proceed in a direction other than the mission objective. Teamwork and patience is the best way to find these hidden troves. There are also usually an abundance of affinity orbs. Note that some mods,

Rage for instance, only drop from containers in missions with a base level of 20 or higher. 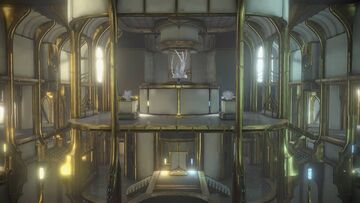 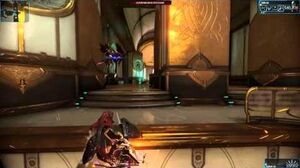 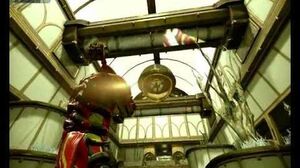 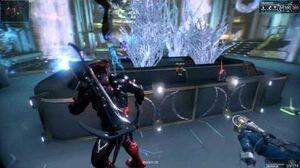 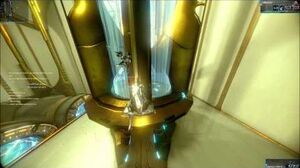 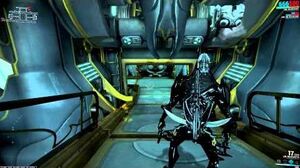 Retrieved from "https://warframe.fandom.com/wiki/Orokin_Tower?oldid=2146541"
Community content is available under CC-BY-SA unless otherwise noted.