The Orokin Derelict is a tileset similar to the Orokin Towers, missions taking place on an ancient Orokin vessel that has been left abandoned to tides of time and tarnished due to long-term exposure to the Infestation. It is the main tileset of Deimos.

Despite the extinguishing of its Orokin features, the derelict still holds the secrets of its past. Decayed versions of the Orokin Challenge Rooms (parkour courses) can be found, although the treasure they contain is not as impressive. Orokin Challenge Rooms in Derelict missions, unlike those in the Void, do not have a chance to drop mods (when containers are broken) as they contain abandoned Orokin containers as opposed to regular Orokin containers. 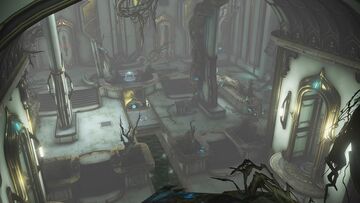 Defense and Survival Derelict missions will have a chance to yield one of the following every 5 waves/minutes. Rotations are as such: A-A-B-C. Derelict Sabotage has optional hidden caches that can be found. Vault requires that a special vault be found and opened in certain missions.

The Orokin Vaults, also known as "The Golden Door" by the Ostrons[1], are special vaults found in the Orokin Derelict tileset on Deimos missions which require a unique void key to unlock, called a Dragon Key.

Corrupted Mods are dual stats mods, where one stat is positive and the other is a negative side effect. One Corrupted Mod will be awarded to each player after a member of the squad successfully opens an Orokin Vault. Each Corrupted Mod has an equal chance to drop (4.3478%).

In advance of the official Heart of Deimos update, Orokin Derelict Nodes have found a new home orbiting Mars and no longer require Keys to play! All Keys in your Inventory or in-progress in the Foundry have had their Credit and Resource costs refunded, while Nav Coordinates can be sold for extra Credits (see below)! Once Heart of Deimos launches, the Derelict node will become Deimos, along with two new nodes: The Cambion Drift and Necralisk!

This raises the question: What happens to players on the Steel Path? You get a unique Emote and Trophy for each region that you have completed, but if the Derelicts aren’t on the map how will you get these rewards?

The answer is: After Heart of Deimos launches, finishing the Deimos region will give you BOTH the Deimos and Derelict rewards regardless of whether you have previously finished the Derelicts. This way everybody has a chance to finish their entire set, and thematically it respects both areas: the original Derelicts, and the new Deimos landscape.

Retrieved from "https://warframe.fandom.com/wiki/Orokin_Derelict?oldid=2188871"
Community content is available under CC-BY-SA unless otherwise noted.